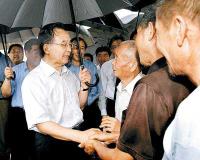 …A web-user posted the photo of the umbrella-wielding Premier along with several other pictures in which official-looking figures had people holding umbrellas for them. One official was delivering a speech while a young girl held the umbrella for him. (Click the title to see the pictures)

The contrast between the set of pictures was so dramatic that the posting attracted hundreds of comments from web-users within hours. They were eager to express their happiness of seeing the Premier in plain clothes and decried the bureaucracy that happens at the local level, saying senior political figures are serving ordinary people….[Full Text]

– All photos are from China Daily