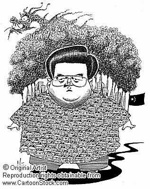 Unlike Jiang, who shouted aloud but seldom brought out the stick, Hu Jintao has made China a formidable competitor for U.S.-EU influence across the globe, providing the same geopolitical option for, among several others, Hugo Chavez and Mahmoud Ahmedinejad that the fall of the USSR temporarily took away in 1991.

Across the world, Hu’s China is emerging as a formidable competitor to the brief unipolar status of the United States, aware that the low prices of Chinese goods make them politically impossible to replace, no matter how shrill the rhetoric of the Peter Mandelsons. If inflation is low in the United States and the European Union, a lot of the credit goes to the Chinese worker, who is waiting to experience the benefits of a better lifestyle that Hu and his team have promised him.

And it is here that China’s president will be challenged. Not within his own Party, which has for years accepted him as the only Top Gun in the system, but among the people of China, who are battling with a miserable health care system, expensive education for their children and low-income jobs despite all the hype about China rising. [Full Text]

“The Endgame of Communist Rule”: Responses