True or False: A Photo Starts a National Debate 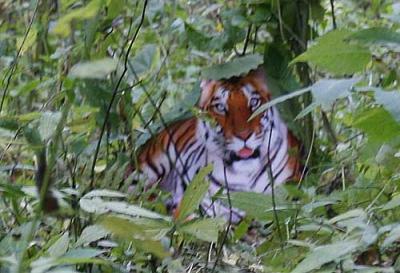 (The photo by Zhou Zhenglong)

A photo taken by a local farmer recorded the vague image of Huanan Tiger/South China Tiger, which had supposedly been extinct for 42 years in mid-western China. The Shaanxi Provincial Forest Ministry held a press conference and granted 20,000 yuan to Zhou Zhenglong who took the picture. The people were thrilled to find the trace of a rare animal. Yet a botanist condemned the credibility of the photo. Then a debate started.

“The tiger roared at me, when my camera flashed,” Zhou recalled. “I thought even if I may die I have to shoot the photos.”

Zhou described the scene of how he took the photos by himself. The Shaanxi Provincial Forest Ministry called Zhou a “hero”. However, a botanist from the National Academy of Sciences, Fu Dezhi, blogged and criticized Zhou for using fake photos.

“The evidence is obvious. The leaves in back are larger than the tiger,” Fu said. “We must put an end to such attempts to fool the nation and the people”.

Zhou and Fu were both pursued by reporters afterwards. Zhou at first refused to show his original film. Later he agreed to show the images publicly and said he would go to jail, if he had faked the photos. Fu suggested Zhou should confess to the local police station.

No results have yet verified the credibility of the photo. Nevertheless, both sides have made their stands clear.

Zhou’s supporter, the Shaanxi Provincial Forest Ministry, said the photo is real. And it can be used as evidence that they have made progress on environmental protection. Yes, 20,000 yuan is a lot money for a farmer, yet that is not proof that Zhou faked 70 photos. And Zhou said he’ll go to court to vouch for his photos.

Fu is known for attacking fake academic reports. In this May he condemned a group of experts in the National Academy of Sciences for faking a big scientific report. But a botanist judging the existence of a tiger from the presence of leaves is not necessarily convincing either.

The incident incited outrage among Chinese bloggers, who cannot decide to trust Zhou or Fu. Sina website even hosted an online survey on the debate.

In the end, the photo event has inspired another discussion on “Anti-Fakes” in China. A couple of years ago, scholar Fang Zhouzi gained fame for attacking fake science discoveries in China. Wang Hai was well-known for finding fake luxury brands.

Thinking broadly to connect to other issues such as IPR and food safety, we may ask again: What else can be fake in China?