Behind The Smile – Nina P. West 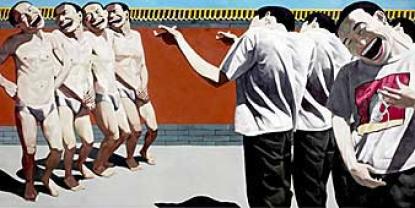 Yue Minjun’s canvas painting “Execution” shone at Sotheby’s in London in October because of its price of $5.9 million. The painting is based on Tiananmen in 1989. From Artfact.com via Forbes:

…Since the early 1990s, Minjun’s works, both paintings and sculpture, have featured figures wearing the same facial expression–a wide, oddly enigmatic smile. The eerie, tongue-in-cheek image is meant to provoke a reaction beyond laughter; it serves as commentary on modern-day China.

The characters seem happy, but are they really? Like Communist propaganda posters that depict workers toiling away in communal bliss, Minjun’s art asks us to consider what lies behind the smile. The artist has said that his subjects are grinning with their eyes closed because he doesn’t want them to see the world around them….[Full Text]

– See also the news video by CNN below: