Here is the front page of the Guangdong based Southern Metropolis Daily, Nov. 16, 2007. The headline reads: “Authoritarian Rule and Dictatorship Will Certainly Fail ” 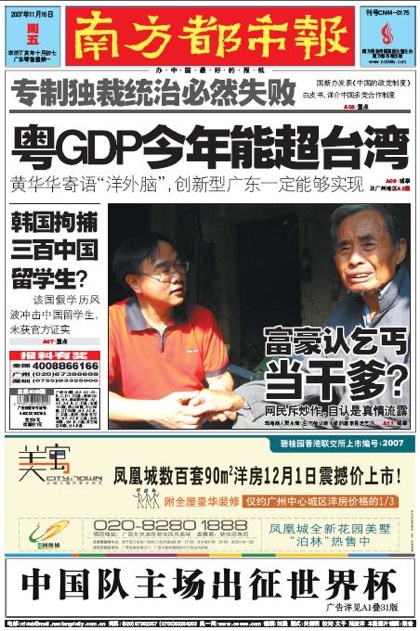 Reading the front page more carefully, the full length of the title actually reads “Authoritarian Rule and Dictatorship Will Certainly Fail: The Information Office of State Council Publishes White Paper, Introducing the Multi-Party System in China.” But the editor made the first half of the title particularly large and bold.

“Authoritarian Rule and Dictatorship Will Certainly Fail” also directly came from one of the sentences of the White Paper itself, even though this is obviously not what the White Paper really meant to discuss.

The Guangzhou-based Southern Metropolis Daily has been on the cutting edge of progressive publications for the last five years or so. While it is their given assignment, like every other Chinese media, to report on the latest White Paper, the Southern Metropolis editor(s) hit their “edge ball” (Êì¶ËæπÁêÉ) by playing with the headline title and fonts.

“Edge ball” is a term in Ping Pong, referring to a hit on the very edge of the opponent’s side which is still a legitimate ball (within bounds) but nearly impossible to defend by opponents since it goes in unpredictable directions. In the mid-1980s, China’s heyday of political reform, Qin Benli (Èí¶Êú¨Âäõ), chief editor of the avant-garde Shanghai newspaper World Economic Herald (shut down in March 1990), used this metaphor to describe the art of Chinese journalists gaming with the censors.

This is not to say that the officials of Central Propaganda Department would not understand this game. Of course they do, just like the readers of Southern Metropolis. But after all, this kind of play cannot be considered as a direct breach of the censorship/propaganda rules. So the ball is just on the edge, but still within bounds, so to speak.

And Chinese netizens are saying “bravo!” Here are some examples of how Chinese bloggers reacted to this title – Please click here, here and here (in Chinese).