The World is in Chaos, and People’s Hearts Even More So

The following commentary is from a Guangzhou-based Chinese journalist with the online name Shangguanbenji (上官本寂), published on Tianya.com, one of the most popular online forums. Thanks to Oiwan Lam on Global Voices for the tip, partially translated by CDT: 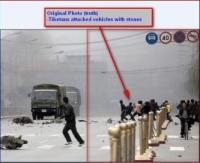 It looks like this finally became a media war fighting back [against international criticism]. Mouthpieces such as Xinhua News Agency must lead [the war] since it is the national agency. The overall spokesperson is big shot Qin Gang (秦刚) of the Foreign Ministry. I summarize the theme as: Tibet in the eyes of western media and their persistent bias that wants to destroy China. Local media like us are being ordered to stand aside, assisting Xinhua if necessary. Recently, there is another new grassroots force, which is the anti-CNN website.

…. This feels quite grand and sensational as if it is a virtual war of one nation resisting humiliation by foreign forces. I am one of the 300,000 people who are ordered to stand aside [in this war]. Frankly speaking, the more intense the fight, the more complex are my own observations. I want to declare that I am not against the country, and [this war] almost ignites my own nationalistic emotions. And this is where the problem lies.

[This media war] theme does not really work for me. But that’s not everything. For powerful China, it accomplished one thing, which is it incited nationalist emotions. As far as the domestic influence is concerned, the effect seems positive [for the government]. Of course, some media can speak loudly, while others like me are ordered to keep our heads low, so the public opinion obviously goes in one direction.

…. At least until now, the nationalist emotion has been successfully ignited, at least on the surface. This is invaluable for people like Mr. Qin Gang, though not something people like me really like to see. This emotion is like a spinning wheel in flames, spinning so fast that it covers up the real fatal weakness [of the government] underneath. Or, if anyone wants to aim at the fatal weakness of [the government] at this moment, he or she will be treated as a traitor of the country, “executed” immediately without any sympathy.

….Let’s hear this storm and thunder and watch the ocean of red flags. What a mess! After a few days observation, even I, with a red heart, can still see that the actions of these red flags are getting boring. The fighting strategy of Xinhua soldiers is pathetic. It can be done much better. But, no matter what, [the government] will not let the Southern Daily Group army to help them. The southern army is not reliable, a potential rebel force, even if they know how to fight media battles. Since this is a war, [the government] has got to rely on its own most trusted troops. 2008-3-28 11：08