Xinhua, an outlet for Chinese government information, sought to lay the blame for the deaths on the Tibetan protesters, citing Tibetan officials as saying “mobs” killed innocent people…

Tanks and other military vehicles were on the streets of Lhasa on Saturday amid a heavy security clampdown following violent riots in the Tibetan capital, witnesses told AFP by phone.

==
Xinhua has now confirmed seven deaths in the riots in Lhasa, and the chairman of the Tibetan Autonomous Region government has said, “We fired no gunshots.” Exile Tibetan groups are reporting much higher casualty figures, though none of the numbers have been confirmed. From AP:

Eyewitness accounts and photos posted on the Internet portrayed a chaotic scene in Lhasa, the provincial capital, with crowds hurling rocks at security forces, hotels and restaurants. The U.S. Embassy said Americans had reported gunfire.

Reports of deaths varied and could not be independently verified, but China’s official Xinhua News Agency said Saturday that seven people were confirmed dead in the violence.

“Most of the victims were business people,” said Xinhua, which had also reported no foreigners were hurt.

Witnesses reported seeing a number of dead bodies in and around Lhasa, but an exact toll was impossible to gather.

“We saw two dead at Ramoche temple, two in the garden, two at the Ganden printing house, and those Tibetans who went to take food to prisoners in Drapchi prison saw 26 Tibetans shot after they were brought in on a black vehicle,” one Tibetan witness said. “There could be about 80 dead, or more, but there is too much commotion here to give an exact number.”

See this previous CDT post for more coverage of the protests including video footage and photos.

A BBC report on the violence is on YouTube. The New York Times has also posted a video about the pro-Tibet protests around the world. The Guardian has posted a map of Lhasa outlining the major actions over the past couple of days. NPR interviewed Tibet scholar Robbie Barnett about the significance of the protests. 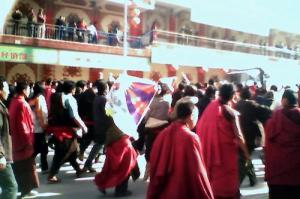 [Image: A cell phone photo shows monks carrying a Tibetan flag as they protest in Gansu, via Phayul]