The Censored Journals on Weng’an Riot by a Chinese Journalist

A Chinese journalist wrote a journal richly documenting what he saw and heard in Weng’an County after the riot. The journals were deleted from his blog by China’s Internet censors shortly afterwards, but was somehow recovered by Zola, a citizen journalist who was also reporting in Weng’an.

Two of my previous journals had been deleted by Internet administrators! Silent mourning!

The Party Secretary of Qiannan Prefecture (the upper-level government of Weng’an ) apologized to all people in the area yesterday. He said that although he didn’t shed tears when his mother died, he cried at this incident. I couldn’t figure out why he shed the tears. Did he feel sorry for the damaged government properties? Or did he feel sorry that extensive police power was used to deal with a common incident?

I suddenly heard that a vehicle of Xiaoxiang Morning News (a newspaper based in Hunan Province) was detained by local police when I was filing stories at the press center this morning, because none of the four reporters in the vehicle had driver’s licenses. But I knew that the reporters had arrived in Weng’an a few days ago. Why did the police stop them today?

I got to know the real reason later, when I was sorting out my photos in a corner — reporters of the paper didn’t contact officials of the Propaganda Department in the past several days and ignored their directions. Therefore local traffic police “strictly” carried out the law and detained their vehicle.
…
I have been trying to interview a few witnesses, but I couldn’t reach them. The police said that they were not in detention. But I couldn’t find their home addresses. When I asked the propaganda officials for help, they said, “They live in the countryside. We couldn’t even find them.”

Some reporters went to the house of the girl (whose death led to the riot) yesterday and had a very difficult time there. A team of undercover police were stationed there to “keep order”. Some reporters were dragged out of the house by them. Even reporters from Xinhua News Agency were not able to talk to the girl’s mother.

A female taxi driver told me just now that Weng’an was a very chaotic place. Robbery frequently happens on streets in broad daylight. She dared not go out at night. Now public security has improved a lot after the riot. She could run her business till 11 p.m. Only her husband could drive their vehicle at night in the past.

I changed taxis and asked another driver about the incident. He said that Deputy County Governor Xiao Song had convened all taxi drivers of Weng’an the other night and told them not to speak blindly to reporters. This driver was not afraid, however. He said he had gone to visit the location where the girl died and saw blood on the floor. How could there be blood if she had drowned? …

The driver recounted another case which made him completely disappointed with local police: a taxi was stolen in 2004. The owner found out who the thief was and had him arrested, but local police let the thief go home without punishment.

How many boys and girls have died prematurely! Why did so many people care about the girl’s death? Because they want truth and justice!

Here are some photos posted by the author together with the journal. 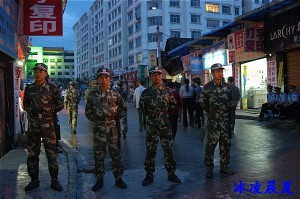 Photo: Armed police on the streets of Weng’an. 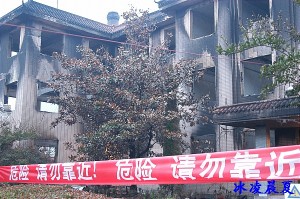 Photo: The government building of Weng’an had been severely damaged by the fire set during the riot. The red banner reads “Dangerous. Keep away!” 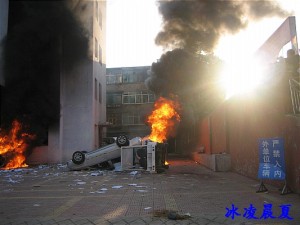 Photo: Vehicles were turned over and burned. 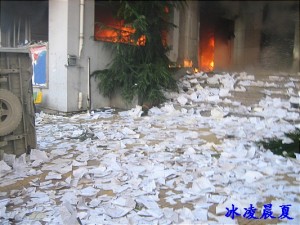 Photo: Paper files of government departments of Weng’an scattered on the ground.

Roland Soong of ESWN has translated some other part of the journals.