Beijing Olympics Building Chief May Be Executed for Corruption

In another controversy surrounding the 2008 Beijing Olympics, Liu Zhihua, the man who oversaw Olympic building construction and was charged with corruption, now faces a suspended death sentence for two years. His offenses include taking bribes, living an opulent lifestyle, and engaging in promiscuous activities.

If the defendant demonstrates good behavior after two years, his sentence may be changed to life imprisonment.  The New York Times reports:

…in June 2006, [Liu Zhihua] was stripped of his post after being linked to a bribery scandal. He was expelled from the governing Communist Party six months later.

Mr. Liu’s case was a major embarrassment to the party. Corruption is endemic, but party leaders had pledged that the $43 billion preparations for the Games would be the “cleanest in history.” 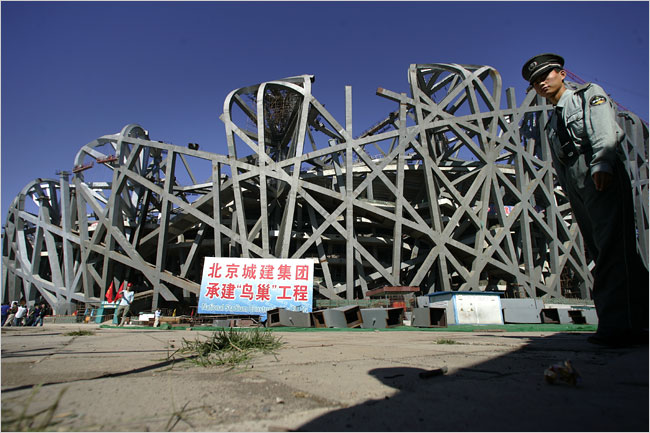 Construction of the Bird's Nest three months after the head of Olympic Construction was dismissed. (Doug Mills/The New York Times)

…On Sunday, Xinhua said Mr. Liu had taken roughly $1 million in bribes during his tenure as vice mayor and as overseer of construction for a scientific research park in the city’s university district from 1999 to 2006.

A 2006 article by Reuters details how Hu Jintao was personally involved in dismissing Liu from his position. Analysts believe this move was motivated by Hu’s own political agenda rather than a desire to weed out corruption.