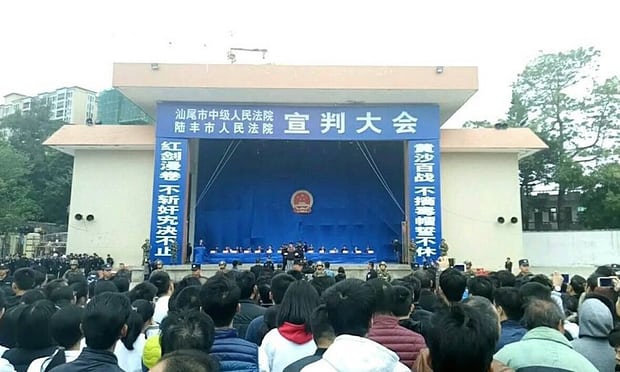 10 people were executed shortly after being publicly sentenced to death in a sports stadium in Lufeng, Guangdong. Seven of the 10 had been convicted of drug-related offenses, and the other two for murder and robbery. At The Guardian, Benjamin Haas reports:

Four days before the event, local residents were invited to attend the sentencing in an official notice circulated on social media. The accused were brought to the stadium on the back of police trucks with their sirens blaring, each person flanked by four officers wearing sunglasses.

They were brought one by one to a small platform set up on what is usually a running track to have their sentences read, according to video of the trial. Thousands watched the spectacle, with some reports saying students in their school uniforms attended.

People stood on their seats while others crowded onto the centre of the field, some with their mobile phones raised to record the event, others chatting or smoking. [Source]

China is believed to execute more convicted criminals each year than all other countries combined. Amnesty International earlier this year criticized Beijing for its secrecy surrounding capital punishment, noting that their “Death Sentences and Executions: 2016” report “do[es] not include the thousands of executions carried out in China, where data on the use of the death penalty remained classified as a state secret.” The Dui Hua Foundation estimated 2,000 death sentences were carried out in China last year, a slight decrease from the organization’s estimates on other recent years.

While public death sentencing is not a common occurrence in modern China, the tactic was used against drug criminals in Guangdong earlier this year. Public sentencing rallies have also been part of an ongoing anti-terror campaign in Xinjiang. According to Amnesty’s estimates, Uyghurs make up 4% of executed convicts in China, despite representing only .7% of the national population.

On Twitter, legal scholar Margaret Lewis puts news of the public death sentences into the context of Beijing’s decade-old policy pledge to more carefully apply the death penalty and “strike-hard” campaigns like those against illegal drugs in Guangdong and against terror in Xinjiang:

After more than a decade of “kill fewer, kill cautiously” (少杀慎杀), a disturbing sign of a reversion to the days when #China used the #DeathPenalty as a weapon in "strike hard" (严打) campaigns. https://t.co/WAdq5TJoZK

To which Amnesty International’s William Nee responded by pointing to his work on how the anti-terror campaign decreases due process in Xinjiang:

Indeed. FYI…I discussed the role of strike hard campaigns in decreasing due process and the especially noticeable lack of transparency in the application of the death penalty in our report: https://t.co/d8u4BDGS3A pic.twitter.com/NOMlSZT55u

Chinese-language publication The Paper described how the men were bought to the stadium in police vans, with sirens blaring, for the extraordinary public trial. Police lined the accused on the stage, with four officers in dark glasses guarding each convict. The convicts were then led, one after the other, onto a small platform set up on what is usually a running track to have their sentences read, as shown in a video of the incident.

[…]“China wants to be a leader on the world stage, but when it comes to the death penalty, it is leading in the worst possible way: executing more people annually than any other country in the world,” said Salil Shetty, secretary-general of Amnesty International.

“The Chinese government has recognized it is a laggard in terms of openness and judicial transparency, but it persists in actively concealing the true scale of executions. It is high time for China to lift the veil on this deadly secret and finally come clean about its death penalty system,” Shetty said. [Source]