‘Left’ and ‘Right’ in Chinese Cyber-Politics 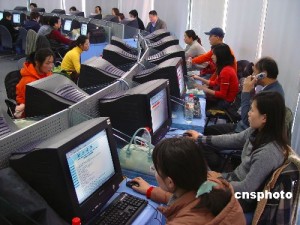 Ever since the Internet was popularized in the late 1990s, Chinese BBS sites and blogosphere have been politically quite polarized, divided into “left” and “right” camps. But these concepts are very different from ideas of “left” and “right” in Western politics.

Here are two sample posts of how Chinese netizens themselves typically define “left” and “right”. The first post was written by netizen Minyue in a nationalistic (“leftist”) online forum Tiexue, in which someone posted a question asking others to define ‘leftist’ or ‘rightist’ in Chinese cyberspace. Translated by CDT:

The leftist camp is essentially the nationalistic camp. Every leftist agrees with such a point of view: national interests precede all other things. From this standpoint, they advocate social justice, altruism, sacrifice and objection to individualism and liberalism. There may be some upset leftists who’d defend them as valuing the nation, not the state. When you ask him which nation he belongs to, haha, the answer is the Chinese nation. Isn’t it still nationalism?

Since national interests prevail over anything else, the country’s territorial integrity must be safeguarded. So for the leftists, use of force, even nuclear force, is a ready option. Those who cry for a nuclear attack on Taiwan are of course leftists.

What are rightists like then? The rightist camp is actually the individualistic camp. All rightists would stress that individual interests take precedence over national interests. The individuals in question here not only include every citizen but also the rightists themselves. In other words, rightists feel that their own interests are naturally the highest interests, so rightists are particularly selfish. Certainly the rightists’ individualism does not mean they are not willing to do anything for the public good or to sacrifice their own interests for those of other people. They believe it’s completely at their discretion. If they are willing to, they will sacrifice personal interest for the common good. But if they are reluctant, nobody or no state power can force them to do so.

Some rightists will definitely oppose such a definition, because they feel it downgrades their well-intentioned cries for the suffering of ordinary people. Haha, but who cares? If you really want to distance yourself from individualism, it only shows that you are not a rightist. Yes, those who oppose individualism and advocate nationalism are all leftists.

The next post is from a more outspoken, pro-democracy (“rightist”) online community, kaidi. Netizen Chaotuo 2008 gave his answer to the question “What is the leftist camp?”. Translated by CDT:

Internationally, the leftist camp normally refers to the political faction that stresses the protection of the interests of the working class and the poor. In most of the countries, both the leftist and rightist camps identify with universal values. Their differences lie in the fact that leftists advocate more government intervention in the economy and more policies to help the poor, while rightists advocate “small government and big society” and value free competition and economic efficiency.

The leftist camp in the current Chinese context refers to the political faction that follows Maoism. They are arch foes of the Chinese rightists (liberals) who embrace universal values. At the same time, they are different from leftists in other parts of the world. The Chinese leftists hold up higher a fake banner of protecting the interests of the poor, but their ulterior motives have little to do with protecting the interests of the poor.

However, both old and new leftists oppose China’s transition toward a constitutional democracy, detest market reforms and see rightists as enemies. They all neglect freedom, distort human rights, despise tolerance, love violence and instigate hatred against the rich. In contrast with the rightists’ appeals for democracy, old leftists want to see China return to the Maoist era with public ownership, while new leftists demand a re-expansion of the state economy, the restoration of a state monopoly in the economic field, and the extermination of “colonial”, “collaborationist” economies of foreign capital and private enterprises.

The privatizing reforms since 1992, which were characterized by the exploitation and pillaging of the powerful, have led to the complete marginalization of the underprivileged groups such as workers and farmers. As the “reformist” measures like forced demolitions, land seizures, layoffs and retirement intensify, the human rights of these underprivileged groups have been seriously infringed upon. Social discontent runs deep and social conflicts escalate. Many in the public, especially middle-aged and elderly people, began to miss the egalitarianism in the planned economy. On the other hand, some of the youth, faced with the scarcity of opportunities, believe that “redistributing the land after toppling the landlords” can be an easier and better solution. So populist incitement by the leftists among the underdogs has been very effective. With the connivance of those in power, the leftists have always held an advantage of discourse, association and assembly over rightists.

Those in power of course also understand the irrationality and brutal, ruthless dictatorial means of the leftists. How can they allow the leftists to once again dominate Chinese society? It is neither those in power nor the masses brainwashed by them who follow the global trend of democratization and determine the future course of the society. The job falls on the middle class and the intellectual elite of conscience.

Read more perspectives from the “right” about “nation” and “country”:

* What Has Your “Guojia” Done for the Rest of the World? by Chang Ping
* Chinese Bloggers: A Patriot Like Me by Hecaitou and Wuyuesanren