Bill Schiller of the Toronto Star reports on his interview with Ai Weiwei and Ai’s project to record the names of all the children who died during the 2008 Sichuan Earthquake.

Now Ai has set his sights on unearthing one of China’s most closely guarded secrets.

He wants to know – and he wants the rest of China to know – how many students died in the Sichuan earthquake. He wants their names, grades and schools… But the government is determined to keep the names and numbers of the dead students secret… Ai, however, has remained untouched. He’s pressing on and wants the government to confront the truth.

“I want them to say: `Yes, those buildings were wrongly built – and we won’t do it again.’

“I don’t care if they punish a few construction people or a few corrupt officials,” he says. “That’s not what I’m interested in.

“…(Ai) felt that it was important for him to take responsibility… and wanted the state as well to be responsible. Thats the kind of China, the kind of nation, he said he wants to live in.”

(Image courtesy of the Toronto Star.) 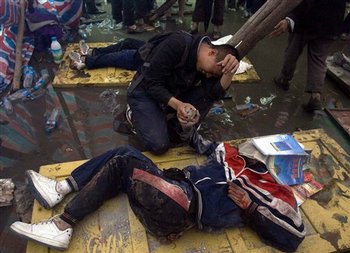 Design blueprints of a school in southwest China that collapsed in last year’s massive earthquake prove that the building wasn’t reinforced as planned, parents of dead students said Thursday.

The accusation goes to the heart of a continuing battle between parents and officials in Sichuan, where the May 12 quake razed large swaths of the mountainous province and left nearly 90,000 people dead or missing.

Almost a year after the disaster, discontent still runs strong among the fathers and mothers of the children who were killed when some 7,000 classrooms folded while other nearby buildings remained standing. They blame shoddy construction and official corruption.

But while the government has promised an investigation and punishment for those responsible, there have been no public attempts to hold anyone to account. Officials have repeatedly refused to release a full tally of student deaths.

Image: In this May 13, 2008 file photo, a Chinese man mourns the death of a student near the site of a school that collapsed in Juyuan, southwestern China’s Sichuan province. Parents of students who died in last year’s powerful earthquake in southwest China said Thursday, March 19, 2009 that blueprints of one of the worst-hit schools show that the building wasn’t reinforced as planned and that construction materials were sold to outside buyers. (AP Photo/Ng Han Guan, File) – AP

Update: Also from RFA: Parents of dead students beaten by police while mourning their children (in Chinese). 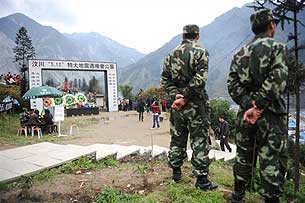 Photo is from AFP, via newcenturynews.com.