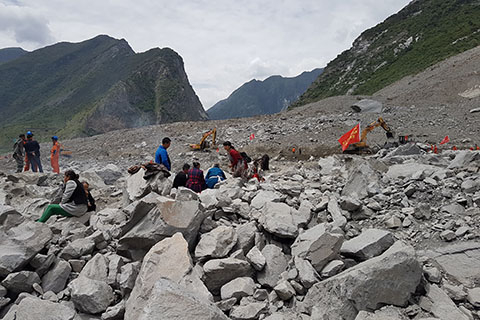 A landslide hit the Sichuan village of Xinmo on Saturday, leaving ten dead and 93 missing. Only three survivors had been dug out by Monday, when rescue efforts were suspended and the site evacuated ahead of a second landslide predicted using radar observations.

The targeted article, deleted from its original home at Caixin but preserved at CDT Chinese, included interviews with several locals. It focused on the lack of official response to villagers’ reports of a large fissure that had opened in the mountainside above them, and on their demands for accountability following the disaster. The crack reportedly first appeared in 2009 or 2010, soon after the 2008 Wenchuan earthquake. It eventually grew to a width of tens of meters and two or three hundred meters in length, filling with spring and rainwater as it disrupted drainage channels. The villagers reported this at least up to the county-level government, leading to an inspection by a township-level official. They say they were never offered relocation or warned about the possibility of landslides, and that nothing was done to drain water from the fissure.

According to the report, the villagers reject the official judgment that the landslide was a purely natural disaster caused by seismic disturbance and heavy rain. Instead, they regard it as partly “man-made,” with official inaction bearing some of the blame. Now, they want to know who is responsible.

Official actions before and after disasters, and their designation as natural or otherwise, are often sensitive topics. “For China’s leaders, making sense of the senseless is a disruptive and dangerous act, because it nudges the mythically infallible foundations of legitimacy and power,” China Media Project’s David Bandurski wrote in the aftermath of the 2015 Tianjin port explosions. “It is never the right or the proper time, according to official China, to seek the sense of tragedy.”