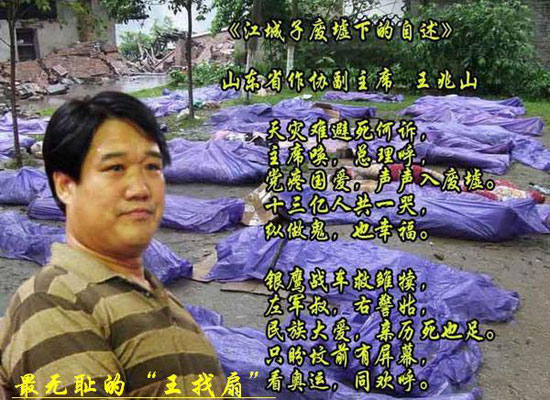 Line from a poem published in the Qilu Evening News on June 6, 2008 by Wang Zhaoshan, vice chairman of the Shandong Writer’s Association, to “honor” those injured and killed in the Sichuan earthquake the month before:

In the midst of the wasteland, a survivor thinks about all that has transpired since the earthquake, gradually coming to this feeling of gratitude—

Spared from dying in the disaster, what complaint can I harbor?
The President beckons, the Premier calls.
The Party dearly loves the country; its voice enters the wasteland.
1.3 billion people weep together.
Even the destruction is a blessing.
Military cars arrive like silver eagles.
On the left, the military are our uncles.
On the right, the police are our aunts.
I just hope that before seeing the grave I can see a screen.
Watching the Olympics, I will call out with joy.

Wang’s praise of the president and premier and his stated joy for being able to watch the Beijing Olympics earned the poem criticism for being insensitive to the earthquake survivors and unabashedly currying favor with Party superiors.

At a time when the nation and people have experienced such hardship, when we are suffering so much physically and spiritually, using these kinds of words to express these emotions is totally inappropriate. It’s very regrettable.

Most recently, netizens have picked up the phrase in their discussion of the Malaysia Airlines MH17 incident:

绝不卖萌穿靴猫: Just missing one sentence: Even the destruction is a blessing! //@东林顾晓绿: Although they already know that Russia, Eastern Ukrainian militia, or Ukraine shot down the plane, they are afraid to engage their national forces to carry out military retaliation. (July 24, 2014)