In a roundtable discussion at the University of California, Berkeley, on March 18th, participants presented their observations and shared their experiences relating to the rise of the Internet and its interplay with China’s media, society and politics. What is the state of new media in China? How do members of Chinese society employ these technologies to participate in politics and what it is the real impact? How does the Chinese government actually regulate and control the Internet? What role does the rise of Chinese cyber-nationalism play in this complicated process? Ultimately, will this pervasive, many-to-many, and emergent communication platform play a critical role in transforming the Chinese political system by fostering the nascent civil society? — or has it actually enabled China’s authoritarian regime to forestall political reform by turning it into a safety valve or even an Orwellian monster? The panel engaged in discussion and elicited meaningful dialogue on these key questions.

Session One of the roundtable discussion was entitled “The Internet, Media and the Public Sphere in China.” The three panelists were Isaac Mao, Hu Yong, and Liu Xiaobiao. Panelist descriptions can be found at the bottom of the page. All three panelists presented in English. CDT has made minor edits for purposes of clarity. Notes from Session Two of the discussion, which included presentations by Liu Jianqiang, Zhang Ping, and Wang Lixiong, can be found here. 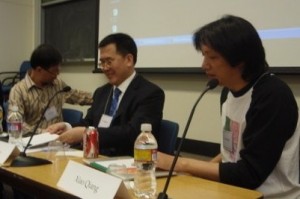 I am going to present a timeline of China’s social media development from 2002-2008. I am choosing the starting date of 2002 as I believe it was the first year of China’s social media era. In these seven years, we have not only seen a quantitative change in the numbers of people involved in social media, but also a paradigmatic change. Furthermore, we are seeing more separated mentalities in China, as in 2008 with the Beijing Olympics.

2003: 2003 saw an increase in the popularity of blogs, which increased ten-fold to number 100,000. This was also the year of the Sun Zhigang case. As people began to use blogs in social cases, the government took notice and enhanced its censorship system. Wikipedia was blocked in China for the first time.

Blog businesses, such as Blogbus, were also launched in 2003.

Mu Zimei, a blogger most known for detailing her sex life, came onto the blogging scene.

2004: Blogger Laohu Miao reported on a murder case on Wangfujing street, and would later continue using his blog as a platform for citizen journalism.

2005: To some degree, blogs began to supplant some of the roles of traditional media. Official promotion of blogs began, and the first CN Blogger conference was held in Shanghai. Michael Anti‘s blog was blocked by MSN spaces, which gave rise to an anti-MSN Spaces movement (“我可以不用MSN Spaces”).

2007: Notable stories included the South China tiger story and the Chongqing nailhouse. Blogger Zuola went to the city to meet the owner of the house and report on the proceedings.

Other important figures were the river crab and the 50 cent party.

2008: The March Tibet conflict and the August Olympic games were two top stories of the year. Anti-CNN appeared, and represented a face of young Chinese nationalism.

Change may be afoot for Chinese Internet users, as we can see by my theory of ‘sharism.’ Briefly: while a large number of different perspectives dominate the Internet, Internet-facilitated exchanges allow for netizen attitudes to be more open to different viewpoints. Blogging, as a corollary, becomes a forum for online conversations.

The sharism theory also suggests that the structure of media as we know it will eventually change. Currently, traditional media is structured by a hierarchical system directed by the government. However, journalists and some media controllers are linked in a social media system and must now increasingly interact with each other. This reflects a networked structure.

My presentation is on “Rumor as Social Protest.” Two pieces of recent news underscore this phenomenon. First, a user on the Internet forum Tianya posted a story in October 2008 on Hangzhou legislation to “protect Internet safety” against malicious rumors, with fines up to 50,000 yuan. The proposed legislation was sharply criticized by Internet users. In April of 2009, the legislation was passed, with the fine reduced to 5000 yuan.

More recently is the case of Wang Erbao, also known as Wang Shuai. Wang, a native of Henan, criticized the local government for illegal requisition of farming land. Police then jailed him for 8 days, though Wang made no libelous claims.

After his release, Wang posted to Tianya and warned that voicing one’s opinions on Tianya could be dangerous. Blogger Shi Nian Kan Chai (十年砍柴) commented on his own blog that anyone could be a potential Wang Shuai.

How, then should we look at the phenomenon of rumors? Libel?

First, let’s define what rumors are. Some define it simply as “false information.” But there are two dilemmas here: first, a lot of rumors contain truth, and then second, if you see rumors as false information, you naturally have the kind of view that a rumor is a sort of social malaise, a collective disease. Words to describe rumors include epidemics, bacteria, and so on.

Instead, we must look at another view raised by U.S. sociologist Shibutani Tamotsu who claimed rumors were a type of social cognition and collective action. While some may think of rumors as irrational, Shibutani thinks rumors can unite the actions of rational man and be used as a weapon of the weak. Rumors, then, are not necessarily false, but will be unofficial.

I also just want to point out that rumors are seriously demonized. The idea of rumors equated with false information grant reason for crackdowns. But I think rumors can be used as a type of social protest. These rumors betray the inner feelings and conflicts of netizens.

Hello, my presentation today is entitled “Three Kinds of Agendas on China’s Internet.”

China has 300 million internet users. This has different meanings for different stakeholders. The first stakeholder is the government: The movement of the internet has implications for the emergence of popular opinion. The principle of the administration is that the Internet should help the government to govern and not make governing more difficult. This is the “official agenda.”

The second is Internet companies. For them, the Internet is a factory and a market with commercial and economic profit. This is the “commercial agenda.”

The third group is made up of Internet users, for whom the Web is a new form of media as well as a platform for communication. This is the “civil agenda.”

The interaction between the three agendas creates a certain Internet ecology particular to China. One such example was Internet news coverage of the two conferences (两会).

Every March, the NPC and the CPPC hold annual meetings in Beijing. These two conferences are considered to be the most important political events of the year. The following is a screenshot of Sina.com’s news page on March 5th. You can see that the editors set Wen Jiabao’s speech in a prominent red and white section. What did Internet users think of this special section?

The most-clicked story from the day was on an interview with the Hong Kong singer Edison Chen, known for his embroilment in a sex scandal. Second was a story on Yao Ming’s latest NBA performance. Third, mainland celebrities. Fourth, a corrupt official fleeing to France. Five and six, more about Yao Ming. Seventh, NBA. The special report, supposedly the most important story of the day, was ranked number eight. This headline story was nowhere near the most important posts that users cared about.

What is the civil agenda? It includes sports news, negative domestic news, foreign news involving China’s conflicts with other countries, and entertainment news. In an online survey conducted by people.com and sina.com, the most popular topic was government corruption.

Online, Internet users are usually not allowed to discuss this at all — much less criticize the government’s position. They can do this only in indirect ways, a roundabout style of criticism. For example, pro-government comments may receive an overwhelmingly negative vote. But even this has limits. A few hours later: the comments have been turned off.

As a result of all this jockeying, the stakeholders have changed their behavior. The government has tried to reshape political rhetoric on the Internet in the name of social stability. Internet companies use news to try to attract readers but do so with ‘infotainment’ articles. Users look for new ways of expression, such as the grass mud horse. But for the most part, they have used it almost exclusively for entertainment.

Mao Xianghui (Isaac Mao), Harvard University
Isaac Mao is a venture capitalist, software architect, entrepreneur and blogging pioneer. He is co-founder of CNBlog.org, and co-organizer of the Chinese Blogger Conference (2005 in Shanghai, 2006 in Hangzhou). He is now Vice President of United Capital Investment Group and Director to Social Brain Foundation, and an advisor to Global Voices Online and several web 2.0 businesses. Mao is a regular keynote speaker for Wikimania, the Chinese Internet Conference and other global events on Internet culture. As a trained software engineer, he has a long history of developing both business and consumer software. He worked as a Chief Architect in the Intel HomeCD project and the Tangram BackSchool suite. From Fall 2008 until Summer 2009, Mao is a fellow at the Berkman Center for Internet and Society at the Harvard Law School.

Hu Yong, Peking University, China
Hu Yong is a well-known media critic and Chinese Internet pioneer. Yong has translated Nicholas Negroponte’s Being Digital into Mandarin. He is currently an associate professor at Peking University’s School Journalism and Communication in Beijing. He blogs on media at huyong.blog.sohu.com.

Liu Xiaobiao
Liu Xiaobiao is media analyst and editorial writer. He worked for the Shanghai-based Waitan Huabao newspaper, where he has written extensively about economics and politics. Liu has won awards for his work from the National Social Science Foundation of China and from the Chinese Association for Middle East Studies. His Master’s thesis in history was on Islam civilization and globalization. He also has experience in radio.