An exhibition of John ‘China’ Thomson‘s photographs will go public for the first time next week. From Telegraph: 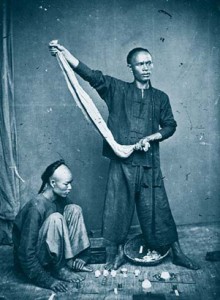 Taken between 1870 and 1871 by the Scottish photographer John “China” Thomson, the images reveal with often startling intimacy a cast of characters from orphans and street gamblers, to beautiful peasant girls and their high-born ladies.

[…]As well as shooting traditional, stiff-backed portraits of Manchu noblemen, Thomson plied the streets in search of scenes that would bring the exotic world of China to life for a curious public back in England.

“These pictures are fascinating because they reveal a world that most artists of that period ignored,” said Betty Yao, who has organised the exhibition that opens in Beijing next week. “Most material from this late Qing era is stuffy, formal and posed, but Thomson’s work is full of life.” [Photo from the National Library of Scotland]

Edinburgh-born Thomson was a pioneer of social documentary photography, fascinated by China and South-east Asia. Such was his expertise on China that he became known as “China Thomson”. He was not the first Western photographer to document China in the 19th century, but he was the first to document the country so extensively, travelling from Formosa (Taiwan) to Fujian and along the Yangtze.

In Slickness and in Wealth