Yang Guobin: “Green Dam” as a Case of Online Activism in China (With Videos)

The Green Dam policy indicates that there is still a surprising degree of bluntness in the exercise of state control over the Internet. In recent years, the Chinese government has demonstrated new levels of sophistication in affairs of Internet governance. One sign is the adoption since 2004 of a soft-management approach, which emphasizes self-discipline, civic responsibility, and the use of legal rather than administrative power to contain harmful contents. Part of the reason why the Green Dam policy met with such strong resistance is that it represented an unbearably heavy-handed approach to Internet control.

The case further reveals an ambivalent and complex relationship between government and Internet businesses. It shows that private businesses can be recruited for the control of the Internet. Indeed, many Chinese netizens see the Green Dam more as a sweet business deal for the software company than an effective control measure. This kind of outsourcing and privatization of control had long caused concern, and the Green Dam controversy brought the issue back into the public limelight, raised concerns about future state-market collusion.

The Green Dam case, however, is much more revealing about online activism than about Internet control. It shows that control almost always encounters opposition, and such opposition—a new form of online activism—can be powerful enough to seriously undermine control efforts.

Also from BBC: Anger in China over web censorship:

Internet censorship has been one of the most widely discussed subjects in blogs, message forums and social media networks in China over the past month.

Web policing was tightened up around the 20th anniversary of the Tiananmen crackdown on 4 June, resulting in the temporary blocking of Twitter and other websites.

Before things could settle down, China announced plans for a new filtering software to be introduced on new PCs from 1 July. The Green Dam Youth Escort software was created to stop people viewing “offensive” content such as pornographic or violent websites.

While the blocking of websites around the 4 June was not unexpected, or unprecedented, the new software has created quite a stir in the blogosphere.

The Green Dam fast became one of the top topics on Twitter. One Twitterer observed: “Chinese netizens are tolerant of censorship in the clouds, but Green Dam crosses the line and becomes surveillance of personal space. The government has miscalculated.”

Here are some recent visual examples of netizens’ resistance to the Internet censor:

In reaction to a series of internet censorship policy, in particular the introduction of Green Dam, a declaration has been circulated on the net in the past two days calling netizens to express and protect their rights to anonymity on July 1st. Below are the declaration posters and English translation of the declaration (all by anonymous netizens via google.doc)

2009 Declaration of the Anonymous Netizens 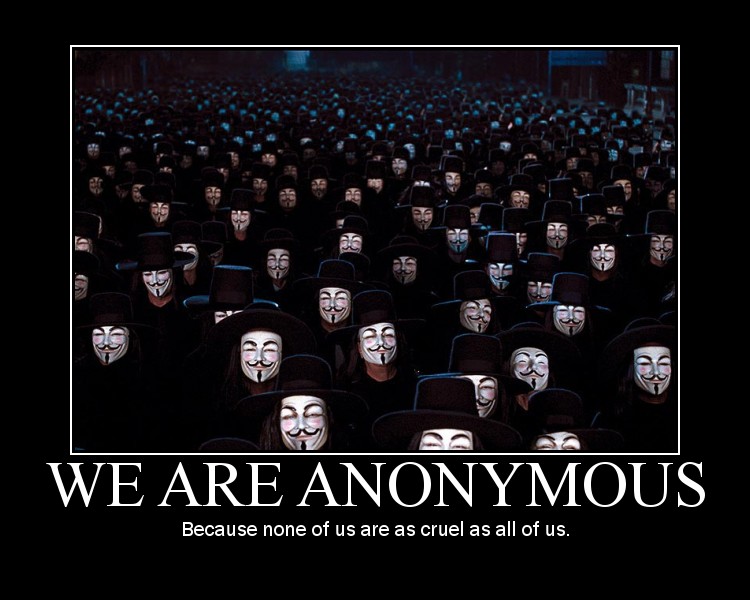 To the Internet censors of China,

We are the Anonymous Netizens. We have seen your moves on the Internet. You have deprived your netizens of the freedom of speech. You have come to see technology as your mortal enemy. You have clouded and distorted the truth in collaboration with Party mouthpieces. You have hired commentators to create the “public opinion” you wanted to see. All these are etched into our collective memory. More recently, you forced the installation of Green Dam on the entire population and smothered Google with vicious slander. It is now clear as day: what you want is the complete control and censorship of the Internet. We hereby declare that we, the Anonymous Netizens, are going to launch our attack worldwide on your censorship system starting on July 1st, 2009.

For the freedom of the Internet, for the advancement of Internetization, and for our rights, we are going to acquaint your censorship machine with systematic sabotage and show you just how weak the claws of your censorship really are. We are going to mark you as the First Enemy of the Internet. This is not a single battle; it is but the beginning of a war. Play with your artificial public opinion to your heart’s content, for you will soon be submerged in the sea of warring netizens. Your archaic means of propaganda, your epithets borrowed straight from the Cultural Revolution era, your utter ignorance of the Internet itself – these are the tolls of your death bell. You cannot evade us, for we are everywhere. Violence of the state cannot save you – for every one of us that falls, another ten rises. We are familiar with your intrigues. You label some of us as the “vicious few” and dismiss the rest of us as unknowing accomplices; that way you can divide and rule. Go ahead and do that. In fact, we encourage you to do that; the more accustomed you are to viewing your netizens this way, the deeper your self-deception.

You are trying in vain to halt the wheels of history. Even with your technocratic reinforcements, you will not understand the Internet in the foreseeable future. We congratulate you on your adherence to your Cultural-Revolution style conspiracy theories in your dealings with dissent; for we too get nostalgic at times. We toast to your attempts to erect a Great Wall among your netizens, for such epic folly adds spice to any historical narrative. Still, there’s something we feel obliged to tell you.

Please click here to see the slideshow presentation of the 2009 Declaration of the Anonymous Netizens.

The following video spoof (in Chinese), entitled “The Fuhrer’s Fury at the Green Dam,” superimposes satirical Chinese subtitles over a mash-up of several movie clips, one featuring Hitler berating his subordinates about the failings of the Green Dam, and another of a heroic man who is able to jump over walls.

The next music video is called “Song of the Green Dam Lady.”

And the one below is entitled: Green Dam Lady: Harmonize Your Whole Family!

After Gmail and other Google services were disrupted last week, this T-shirt went on sale in some Chinese online stores.

The following image has also been popular in the Chinese blogosphere. The caption reads:
“Last time I was not able to stop you. Now you will not be able to stop me!” 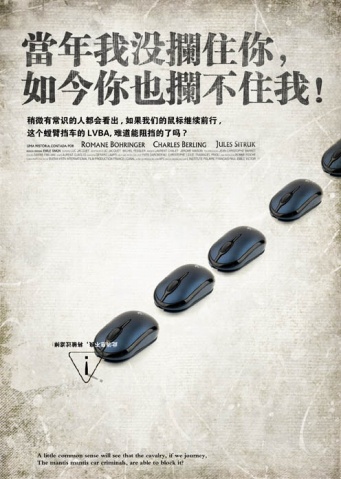