Stabbings in Beijing ahead of National Day (Updated) 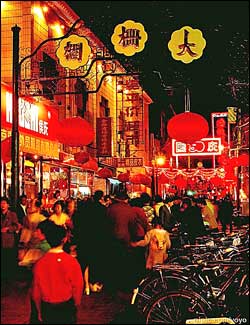 Xinhua put out a brief report in English only yesterday, but deleted the news again from its own website around 11 pm on September 16. Here is the report, archived by CDT:

A man armed with a knife stabbed two people to death and injured 12 others in Dashilan, a major commercial center near Qianmen in downtown Beijing, police said.

The tragedy occurred at around 6:40 p.m. on Thursday. The man has been captured, according to Beijing police sources.

Read this news on Twitter (in Chinese) here. Many comments about this event on the Chinese blogosphere are being deleted quickly since last night.

However, here is a Chinese version of the Xinhua report which is now on many news sites in China (via Xinmin Net.) The report was published Beijing time 2009-09-17 22:47:31, translated by CDT:

On 6:54 pm, September 17, 2009, a man was stabbing people in Dashilan, Xuanwu district, Beijing. He was caught by police on the spot. All injured were immediately sent to hospital for treatment. Two injured people died. From the early stage of investigation, the name of the suspect is Zhang Jianfei, male, 46 years old, from Jilin city, Jilin province.

Here is the latest report by Tania Branigan of the Guardian:

A man armed with a knife killed two people and injured 12 in the heart of Beijing this evening, state media reported. The deaths come as intense security is put in place for the 60th anniversary of Communist party rule on 1 October.

The official news agency Xinhua said police captured the assailant after the attacks on Dashilan street in Qianmen, a major commercial area to the south of Tiananmen Square, the capital’s symbolic heart where National Day celebrations will take place. Xinhua said two security guards died in hospital and named the suspect as Zhang Jianfei, 46, from Jilin province.

Beijing is generally regarded as a very safe city. But last year, amid similarly tightened security for the Olympics, a Chinese man stabbed to death an American tourist visiting a historic site and injured the man’s wife and their guide.

Dashilan police station said no crime report had been filed tonight and that nothing had happened.

An employee at a cinema on the street confirmed there were large numbers of police, adding: “I guess they are preparing for tomorrow’s rehearsal.”