A manhunt for a murder suspect in Fujian ended on October 18 with the alleged killer’s death—to the dismay of many on the Chinese internet, where he had turned into an unlikely folk hero of sorts. Ou Jinzhong, 51, was accused of killing two neighbors and injuring three others on Sunday, October 10 over a long-running dispute about the construction of Ou’s new home. He then escaped to a mountain cave, where he hid for eight days. The local government promised a reward of 20,000 yuan for hints leading to his capture and 50,000 yuan for his corpse, a move some saw as a ghoulish invitation to vigilante justice. Online, many saw something sympathetic, even admirable, in Ou’s desperate act: “The whole internet sympathizes with this one lone man.” Much of the sympathy was motivated by the injustices heaped on China’s rural poor and the perception that Ou was exacting a just price for the years of neglect he, and so many nameless others, had experienced at the hands of rural governments.

Before the alleged murders, Ou had taken to Weibo. Earlier in 2021, Ou outlined his plight in a series of petitions published on the social media site. He wrote that his neighbors, corrupt officials, and “village tyrants” had blocked him from building a new home after he tore down his old house in 2017. Since then, Ou and his 89-year-old mother had lived in a metal shack of his own construction. He wrote movingly of endless dead ends: “I hope that someone can tell me where I can file a suit. I’ve already petitioned at the provincial and city offices, and didn’t receive any response. I’m begging someone to point out the way.” Weibo shuttered his account after it began receiving attention after the deaths. The exact nature of his conflict with his neighbors remains unclear. Early reports indicated that Ou’s roof blew off in a storm, landing in his neighbor’s yard, thus sparking an argument that turned deadly. Neighbors disputed those reports, telling reporters they’d heard no arguments in the area over the last two months. 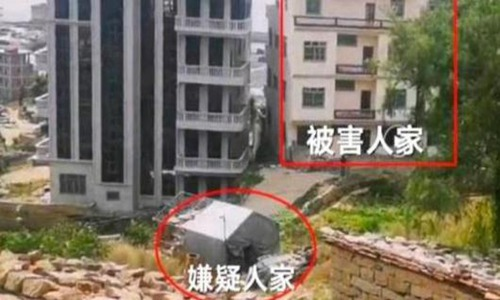 In earlier years, Ou had earned a measure of local acclaim for saving a young child from drowning. During the manhunt, a man claiming to be the child Ou once rescued said in a video posted to Weibo that Ou was “a good person with a sense of justice.” In 2008, Ou was commended by a regional paper for saving two stranded dolphins. Ou’s faith in the media was evident in a screenshot he shared of his message to a reporter with Southeast Television, a Fujian station: “I’m begging you on a matter of life-and-death.” A reporter for The Beijing News noted that Ou had written the phone numbers for several media outlets and petition bureaus on the inside of a cigarette carton left behind in his shack. His pleas evidently fell on deaf ears. The media and its role in Ou’s case were critiqued last week in a viral essay, “He Saved Dolphins, Who Will Save Him?” The post argued that Ou’s “collapse into criminality turned out to be his final call to arms. Society should have listened to him long ago. Of course, ‘society’ is a bit vague. The most important thing is that the government can hear him.”

Ou’s voicelessness, more than anything, is what led Weibo commenters to despair on his behalf. A selection of comments selected by CDT Chinese and translated below demonstrate their anger, grief, and sympathy for a man accused of a grisly crime:

苏宁马越海：Ou Jinzhong is merely the face of the murder. Official inaction and closed channels of communication are the true killers. These behind-the-scenes murderers must also face the law!

Tom奔跑的五花肉：All those years he spent living in a shack, and no one cared. The local government is well and truly evil.

WangChorn：If the dead and injured were from the village tyrant’s family, then I’d admire this Ou guy for being a real man. In this walled country, one could say that’s the only true law of survival: from the highest cadres up on the rostrum down to the most remote village, all they understand is violence and ruthlessness—there is no civilized order.

柒白露：The hands that once saved a life had no choice but to pick up a butcher’s knife. [Source]

The broad sympathy for Ou is reminiscent of the 2008 Yang Jia case. Yang Jia stabbed six Shanghai policemen to death in apparent retaliation for a beating he suffered in police custody. Many on Weibo were outraged by his treatment by police and found the speed and secrecy of his trail egregious. Yang was executed mere months after the stabbings. In 2012, indie film director Ying Liang released a fictionalized portrayal of Yang’s ordeal, for which he was promptly exiled from Shanghai. Ying eventually settled in Hong Kong.

A reward notice for Ou’s corpse issued by the local government.

Anger over Ou’s case was fanned by an unusual reward put out by the local government promising 20,000 yuan for information leading to his capture and 50,000 yuan for his corpse. Many on Weibo suspected that local officials wanted Ou dead:

桃汁提花逃：The government is going to spend taxpayer’s money to hire a killer!!!

霜kirina：How long is the Fujian Provincial Party Committee going to keep playing dumb? Fuck, is this still China? What about the rule of law? Who will step up to put an end to this? They’ve all gone mad!

我是洋大人: An honest man is being hunted by the local government. How surreal! [Chinese]

After eight days, Ou was discovered by police. According to authorities, Ou committed suicide after they surrounded the cave where he had been hiding. But many on Weibo questioned this official story, and mourned his passing:

qian_ya：He was able to hide out in that cave for eight days, he didn’t want to die!

我想操我自己: In all his life he never enjoyed the protection of the law.

鱼眠眠之安：They’ve finally driven him to death. But this thing isn’t over. He paid for his murders with his life. Who will pay for his five years [in a shack]?

脊轩：I’m not surprised by how this turned out. As soon as the reward for a corpse was higher than one for the living, this result was predictable. After all, dead men cannot talk. Now discourse power has returned to the leading cadres’ hands. They can finally begin smearing him, proving their innocence, and covering their own official backsides.

落花无情非有意：Ah, Mengpo, remember to give this uncle some extra sugar in his soup. [Chinese]

Ou’s saga highlights several issues plaguing rural China. Despite the “complete victory” of the Party’s anti-poverty campaign, poverty remains endemic in the countryside. Rural governments are often compromised by “village tyrants,” local power brokers who wield undue influence over public affairs. Although targeted by a recent campaign to “Sweep Away Black and Eliminate Evil,” such influence rackets still operate. A Weibo user put it succinctly: “If only [the government] had taken care of this a month earlier, then three people wouldn’t have lost their lives.”