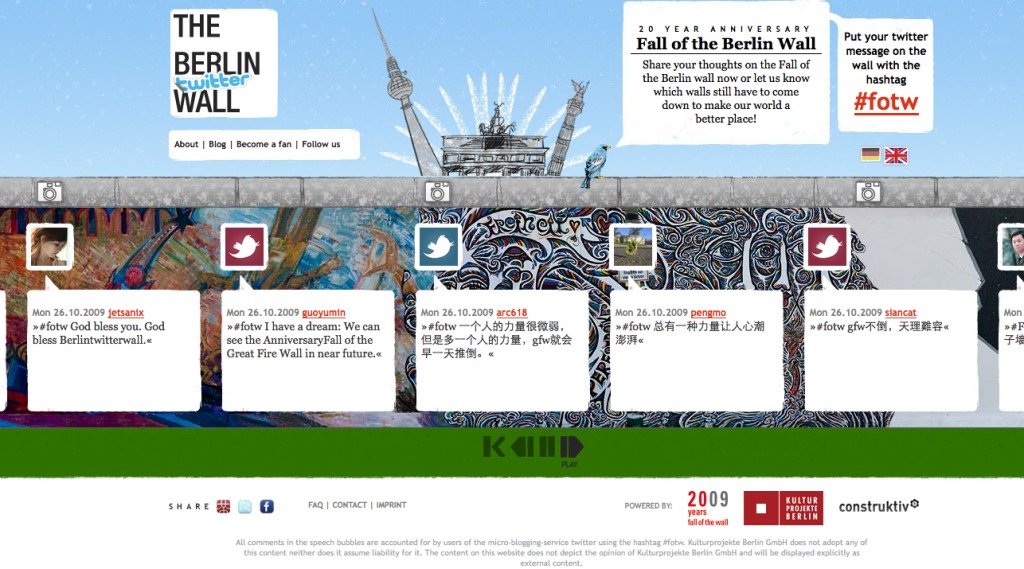 To commemorate the 20th anniversary of the fall of the Berlin Wall, KulturProjekte Berlin set up a virtual “Berlin Twitter Wall” where individuals could post their thoughts on the occasion through use of a Twitter hashtag #FOTW. The site’s introduction further invites participants to “let us know which walls still have to come down to make our world a better place!” Chinese netizens have made their voices heard on this last point, and Chinese comments bashing the Great Firewall and Internet censorship now dominate the site. Selections of these comments are translated by CDT below:

* Peterlue #FOTW All Chinese on the electronic Berlin Wall, spectacular! 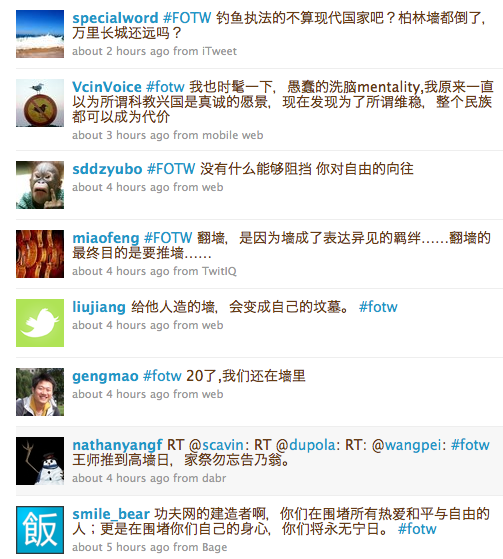 * specialword #fotw Is “fishing” [trapping its own people in jail by using false evidence] considered a way of enforcing law in a modern society? [reflecting recent news in Shanghai]

The Berlin wall has fallen, and so will the Great Firewall.

* VcinVoice #fotw I always thought the promotion of science and education from the state was based on some real sincere wish for the people; now it seems that nothing, including the future of our own people, can get in the way of the so-called political stability.

* sddzyubo #fotw Nothing can stop one’s quest for freedom.

* miaofeng #fotw We climb the Great Firewall because it has blocked out all of the dissent, and we do so to eventually get rid of the Wall.

* liujiang The wall built for others will eventually become a grave for the builders. #fotw

* gengmao #fotw It has been twenty years, and we are still in the Wall.

* nathanyangf RT @scavin: RT @dupola: RT: @wangpei: #fotw “On the day the Great Firewall falls, please do not forget to tell me when you visit my grave.”

[Paraphrasing Chinese poet of the southern Song dynasty, Lu You‘s famous patriotic line: “On the day the lost land is taken back, please do not forget to tell me when you visit my grave.”]

* smellbear Not only do the builders of the Great Firewall restrain the people who love peace and freedom, but they also imprison themselves—so they will never have peace. #fotw 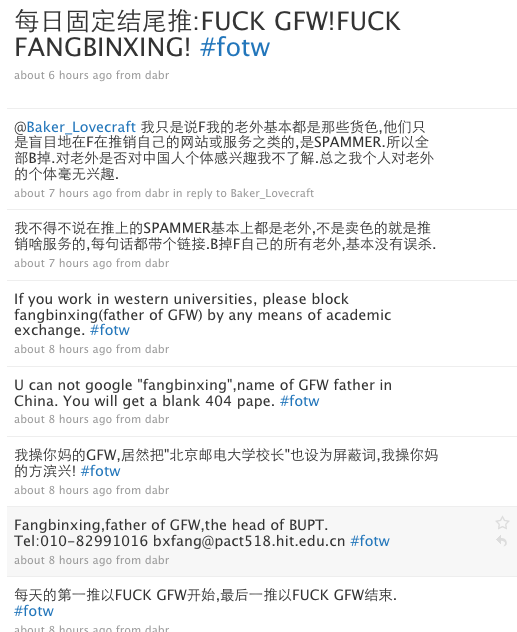 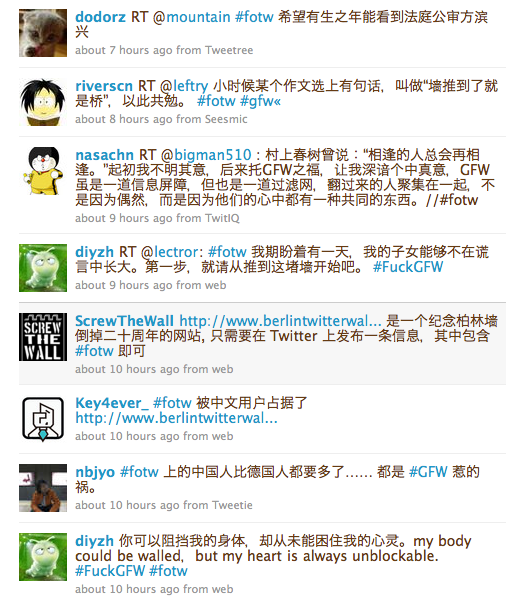 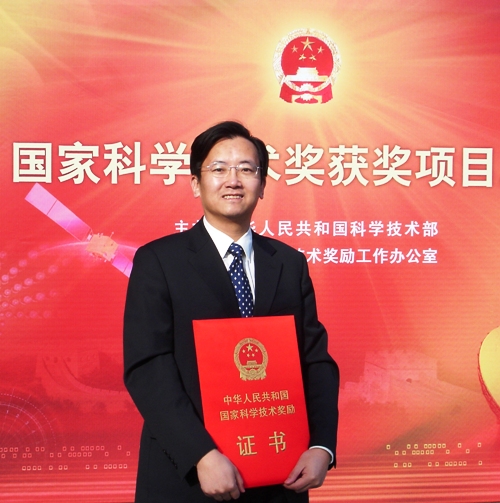 Dodorz RT @mountain #fotw I hope in my remaining years I can see Fang Binxing on public trial at the court.

Dr. Fang is known as “The Father of Great Firewall” among Chinese netizens.]

* petrelwz #fotw The existence of the Wall made us realize our capacity to jump. The wall is high, but we can always jump a little higher.

* gnap #fotw Compatriots in West Germany, please throw a few more proxy addresses to this side.

* Riverscn RT @leftry I read one sentence in some composition anthology when I was a kid, which says, “When a wall is torn down, it becomes a bridge.” Let’s use this to encourage each other. #fotw #gfw

* Nasachn RT @bigman510 Haruki Murakami said, “The ones who come across each other will come across again.” In the beginning I didn’t understand what he meant, but thanks to the GFW, I now fully understand its true meaning. Although the GFW is a barrier of information, it is also a filter net. People who climb over it and get together share something in common in their hearts, not by accident. //#fotw

* lectror: #fotw I’m anticipating that one day, my children can grow up without lies around them. Please start the first step by tearing down this wall. #FuckGFW

* langliang The wall will eventually fall down no matter how high it is. #fotw

* Diyzh: my body could be walled, but my heart is always unblockable. 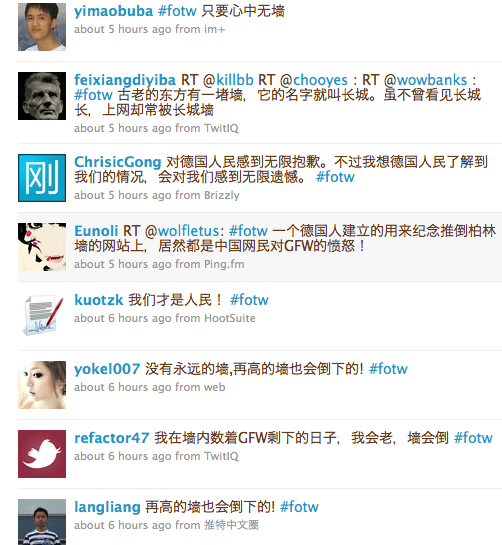 * Yimaobuba #fotw As long as you don’t have a wall in your heart.

* Feixiangdiyiba RT @killbb RT @chooyes : RT @wowbanks : #fotw There’s a wall in the ancient oriental world, and its name is the Great Wall. Although I never saw how long the Great Wall is, I’m often blocked by the Great Wall while I’m logging onto the Internet.

[Paraphrasing a famous song “Children of the Dragon” ]

* ChrisicGong My apologies to German people a million times [for taking over this site]. But I think if Germans learn about our situation, they would feel sorry for us a million times.

* jerio #FOTW it’s sad to see my 2 best friends join the CCP~~wait until GFW falls and there is no more corruption, then I can consider that.

* Eunoli RT @wolfletus: #fotw The website established by a German to commemorate the fall of the Berlin Wall is full of the fury of Chinese bloggers at the GFW!

* kuotzk We are the people! #fotw

* yokel007 There’s no eternal wall. The wall will eventually fall down no matter how high it is. #fotw

* refactor47 I’m counting the remaining days of the GFW inside the wall. I’ll get old, and the wall will fall down. #fotw

The Berlin Wall is gone, but people can still tag their memories on it online.

The Berlin Twitter Wall, which went online Tuesday, encourages people to share their memories of the wall’s collapse and hopes for the future on a scrolling wall using Twitter, the social networking site.

By Wednesday, there were more than 100 comments in Spanish, English, German and French. Some said they were too young to remember the fall of the Berlin Wall on Nov. 9, 1989.

Others called upon people to help carry the memory into the future.The online wall is part of events organized by the city of Berlin to help mark the anniversary of the event that paved the way for a reunited Germany and Europe.

The hashtag for the Berlin Twitter Wall is (hashtag)FOTW and there is a Twitter account called “FalloftheWall” that provides daily updates detailing historic events surrounding the Berlin Wall.

Read also Mark MacKinnon,’s report on the Globe and Mail: Mr. Hu, tear down this firewall! :

It was supposed to be a place to remember where you were and what it meant to you on Nov. 9, 1989, when the Berlin Wall fell between East and West Germany, marking the beginning of the collapse of communism in Eastern Europe.

But something very different – and fascinating – is happening instead at the Berlin Twitter Wall, a website that went online last week as part of the city of Berlin’s anniversary celebrations. Instead of reminiscences about life behind the old Iron Curtain, the site is being overloaded with complaints about a new barrier sealing people off from the outside world: China’s thick web of Internet censorship, referred to locally as the Great Firewall (or GFW, in character-saving Twitterspeak).

Most of the writers posted in Chinese, and claimed to be doing so from inside China, where Twitter and dozens of other popular websites have been blocked by the Communist government headed by President Hu Jintao. (Click here for an incomplete list of the banned sites.) Blocked sites can be accessed from inside China via virtual private networks, provided you have both a private computer and the tech savvy to do so. The entire province of Xinjiang – home to 21 million people – has been almost completely without Internet service since deadly ethnic riots hit the city of Urumqi on July 5.