On This Rare Map, China is the Center of the World

The Library of Congress is currently displaying a map of the world created by Matteo Ricci in 1602 for the Chinese emperor Wanli: 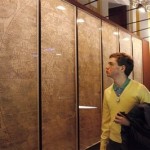 “In olden days, nobody had ever known that there were such places as North and South America or Magellanica,” (Ricci) wrote, using a label that early mapmakers gave to Australia and Antarctica. “But a hundred years ago, Europeans came sailing in their ships to parts of the sea coast, and so discovered them.”… The Ricci map going on display had been held for years by a private collector in Japan and will eventually be housed at the Bell Library at the University of Minnesota. The map symbolizes the first connection between Eastern and Western thinking and commerce, said Ford W. Bell, co-trustee of the fund started by his grandfather, General Mills founder James Ford Bell.

…Ti Bin Zhang, first secretary for cultural affairs at the Chinese Embassy, said the map represents “the momentous first meeting of East and West” and was the “catalyst for commerce.”

“When the James Ford Bell Trust asked the Library to be the site for unveiling the Ricci map in North America, I was delighted,” said Deanna Marcum, associate librarian for Library Services. “The Ricci map, the first map in Chinese to show the Americas, will be placed near the Library’s Waldseemüller Map of 1507, the first document to name America and to depict a separate and full Western Hemisphere. These two maps will ‘talk’ to each other, offering a unique perspective on East-West linkages.”

Putting Tibet Back On The Map