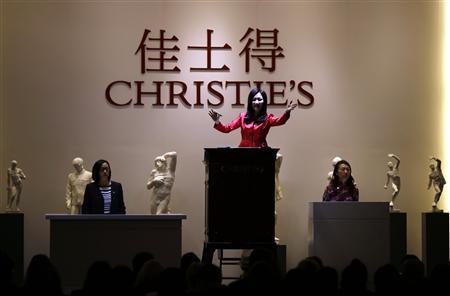 Licensed to operate in mainland China earlier this year, the auction house Christie’s has found a rather large market for art and luxury goods in China. From John Ruwitch, Jiang Xihao and Adam Jourdan at Reuters:

(Reuters) – Christie’s sold $25 million worth of art, jewelry, watches and wine on Thursday at its first auction in China, as it became the latest international auction house to operate on the mainland.

[…] “Interest from Chinese buyers was very strong, with international bidders on the phone and online all coming together,” Christie’s CEO Steven Murphy told a news conference after the auction in central Shanghai. [Source]

Nevertheless, it will not be easy for Christie’s to get a big share of the Chinese market. Its rivalries include Poly International, which has connections with the People’s Liberation Army. From The Economist:

The foreigners must keep their wits about them. The power of incumbents is one challenge. Although China has about 6,000 galleries, the market is dominated by 44 licensed auction houses (out of 300 in total), which control perhaps 70% of sales of art and antiquities. Cai Jinqing, head of Christie’s in China, says her firm plans to take them on with its depth of knowledge (it offered expert art lectures before this week’s auction), innovation (it does online art auctions) and its trusted global brand.

Zhao Xu, the boss of Poly International, a giant auction firm owned by a conglomerate controlled by the army, is supremely confident that the arrival of foreign rivals “will change little”. He argues that the newcomers have no competitive advantages inside China. As an example, he points to local firms’ vast experience selling Chinese paintings and calligraphy, which made up roughly half the value of all items auctioned last year.

Not only will the foreign auctioneers have to do battle with an offshoot of the mighty People’s Liberation Army, they will have to operate in a market that is distorted by a mix of under- and overregulation, lack of openness and outright crookedness. One barrier is high taxes and a heavy-handed system of permits. Another problem is the prevalence of counterfeits. Several experts insist that some artists also work in cahoots with galleries, big auctioneers and even property developers to rig auctions. Though less common since the market correction last year, an insider says such practices still abound: “it happens in the West too, except in China we do it with more enthusiasm.” [Source]

Mr. Zhao also holds a nationalistic belief that “Chinese still prefer a big Chinese auction house run by Chinese people to help them sell their art works”,  Patti Waldmeir at The Financial Times reports. However, recent theft scandals and renovation controversies in historic sites, including the famous Forbidden City and the Summer Palace, indicate that Chinese people may actually need to better care of their national treasures. From Ilaria Maria Sala at ARTNews:

The Summer Palace, a secondary imperial residence located on the outskirts of Beijing, was in the news this year after a portion of a marble pillar had been discovered stolen. While officials at the Summer Palace were keen to keep the disappearance under wraps, last February a user of a Chinese microblogging platform posted a series of photos showing a gaping hole in one of the antique marble balustrades.

Soon after, the commercial media reported the story, and the whole scandal came out into the open. The missing artifact—a 20-inch-tall hunk of white marble weighing about 110 pounds—was part of 60 similar pillars delicately carved with dragon and cloud motifs, most likely produced in the 18th century, in the glory days of the Qing dynasty. A press release from the Summer Palace later acknowledged the disappearance, adding that the missing pillar would be “replaced with the same material soon” and that it was “probably carved in the late Qing dynasty,” in the 19th century, and not all that precious—once again irking conservationists and the public alike. [Source]

See more on the Forbidden City and Christie’s via CDT.