Ronnie Chan: The West’s Preaching to the East Must Stop 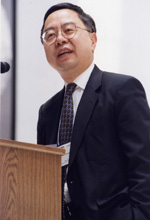 Ronnie Chan, a Hong Kong based businessman and former head of Enron’s audit committee published an OP-ED on Financial Times:

While the world debates the future of its financial system, global rebalancing or even power shifts along five dimensions are quietly taking place. Their implications are profound and may well lead to a more stable world.

The first is a rebalancing of moral authority. The system that the west touted as superior has failed. Why should developing countries blindly follow its model now? Remember the moral high ground that western leaders took during the Asian financial crisis? Hong Kong was bashed when its government intervened in August 1998 in the stock market to fend off the western investment banks and hedge funds bent on destroying the city’s currency.

…The second rebalancing has to do with decision-making in global economic affairs. The west can no longer dominate, given its partial loss of moral authority. For the first time in centuries, the developing east has some say. Global economic power will be more diffused. Symbolic of this new reality is the minor adjustment in voting rights in the World Bank and International Monetary Fund.

…The third is the shift in the centre of economic gravity from the Atlantic to the Pacific. The earlier rise of Japan alone was insufficient to achieve this. China’s size and growth momentum finally shifted the balance.

…The last shift is hardly acknowledged: most developed economies, with the exception of the US, will move from seeking ever higher growth to trying to maintain it. The crisis shows that blindly seeking growth is dangerous.

Ronnie Chan has been the subject of some criticism for this piece. The following excerpt is from Howard Winn on the South China Morning Post:

Our first thought is that Chan should stick to developing property. Our second is that he could try building smaller and better buildings, more environmentally friendly and so on. But of course there is a catch – he won’t be able to make the billions he’s made in the past.

As for pontificating about moral authority, he’s a fine one to talk after his experience on the audit committee of Enron Corp when it collapsed wiping out billions of dollars in employee pension benefits. But Chan always likes to have it both ways and plays to galleries in the East and West when it suits.

Ronnie is on more US boards than you can shake a stick at, while at the same time assiduously courting Beijing by, among other things, spending millions rebuilding two palaces within the Forbidden City with almost no fanfare (except that the right people know what he’s done). The palace that’s finished, Qianlong’s favorite, is still closed to the public and now a favored venue for senior party cocktails. In Hong Kong, he is the major donor behind Asia Society, on a much more modest scale of spending but which provides a regular platform for Ronnie to present himself to a mostly American, financial community audience. He truly is playing both sides.

Ronnie Chan, chairman of Hang Lung Properties and Hong Kong head of the Asia Society, has a reputation for planting big wet kisses on the posteriors of Chinese officials, while castigating American democracy (despite the fact that he reportedly holds an American passport). Yesterday he was at it again — as he thanked Stephen Roach of Morgan Stanley for his lunch talk, Mr. Chan mocked the U.S.’s supposedly superior form of government for selecting economic illiterates as lawmakers. (OK, sometimes we can see his point, but then when was the last time America had a Cultural Revolution?)

Mr. Chan also likes to attack the world’s other great democracy, India. As this posting shows, his tone aggravates both Indians and Americans. We certainly hope the Asia Society is getting a lot of donations out of this guy given the number of people he alienates.

Seeing the profits Hang Lung and other property developers are again making these days in Hong Kong, we understand why Mr. Chan hates democracy so much. It’s a simple matter of self-interest. If Hong Kongers ever get the vote, we expect that the first thing the new government will do is tinker with the perverse and distortionary land system that allows Mr. Chan and his friends to in effect levy a regressive tax on the lower and middle classes.

‘The Right Route’ For China’s Reformers

How China Should Rule The World

Pearson to Push FT Further into China via Web – Keralanext