A recent translation by CDT of an internal document by a local officer of the Domestic Security Department (DSD) revealed some of the working methods and mechanisms of China’s secret police work at the ground level. That document helped illustrate how extensive the human surveillance and intelligence-gathering networks and activities are throughout the Chinese society, developed and controlled by the government security agencies.

The following interview with a county police chief is another example that reveals critical details about government surveillance efforts. In particular, according to this Xinhua article, in a county of 400,000, there are 12,093 informants on the government payroll who are charged with gathering intelligence.

… The policing model of our Bureau is innovative because of the extensiveness of its range. Every village has a police station, all together 277, and there are another six police stations in the capital town of Kailu County. So we have a very sensitive intelligence network. The 289 village assistant police staff members are all from local villages, so they have the strength of familiarity with the people, locations, and the local situation. They can timely and accurately discover all sorts of information that might destabilize the society, and can effectively maintain stability at the village level. This is also an effective solution to the problem of police manpower, and strengthening the capacity of Public Security agencies in handling the current complex situation. 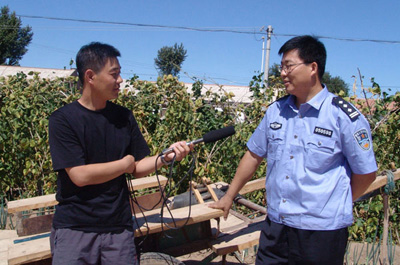 Xinhua reporter: I’ve heard that here in Kailu County, the PSB has a “10,000—1,000—100” program, also known as the “Three Ones” program. What specifically is the content of this program?

Director Liu: The “Three Ones” program is a means used by our Bureau to comprehensively promote the strategic guidance of intelligence gathering. Specifically, all of the People’s Police and auxiliary police within the Bureau no matter what type of police division they are in, no matter their station, will each establish twenty informants within their communities, villages, work units, and various other complex arenas*; together there are 10,000 of these informants. Adding to this foundation, within the “actual combat” units such as the criminal investigation police, economic investigation police, Domestic Security Department (DSD), Public Information Security Supervision, public safety, and police stations, each People’s Police officer will establish five “eyes and ears”; these total 1,000. In addition, within the criminal investigation police, economic investigation police and DSD departments, each People’s Police officer will establish at least four special criminal intelligence gatherers; these total 100. As of late, our Bureau has established 12,093 informants.

By establishing this vast array of informants, by diligently creating a web of intelligence information, by comprehensively searching for intelligence such as tips, public opinion information, social stability information, etc, [our Bureau] has formed a large information processing system in which all police agencies gather information, share information, and use information. [We] have made it a priority to collect in-depth information about conflicts and problems that might cause petitioning to higher levels of government. [As such, we have striven to] quickly collect information, mediate and reconcile conflicts, effectively take care of [those responsible] for conflicts and [those who] possibly might petition higher levels of government. [In addition we have striven to] actively and proactively dig deep for intelligence information on many fronts, proactively discover non-harmonious elements that affect stability. [We have striven to] evolve from being passive to being active, to go from punishing after the fact to resolving the problem before the fact. [We have striven to] completely change the [prior] practice of sitting and waiting for the masses to ask for help, and completely change the practice of sitting and waiting for something to happen before going and taking care of the matter.

For example: on February 21 at 9:26 AM, our Bureau’s “Three Ones” program office received the economic investigation police captain’s report that in the Gaoruo village of Heilongba township there were more than ten individuals who were upset about an unfair distribution of calamity insurance proceeds. They were planning on petitioning a higher level of government in the county. At the time, the Two Conferences** were then being convened in the county. Our Bureau, using this information, sent a number of coordinated police units and successfully intercepted [the group of petitioners] and dissuaded [them from petitioning], [thereby preventing] a mass incident of petitioning to a higher level of government. [They also ensured] the Two Conferences proceeded smoothly and had a good public safety atmosphere. [In so doing, the Bureau] received good praise from the leaders at the meeting.

* “Complex arenas” refer to places where people are closely gathered together, there is a lot of movement, and people do not know each other well or have a specific relationship with each other. “Complex arenas” include public entertainment and athletic arenas, parks, scenic areas, commercial areas, transportation hubs and means of public transportation. See http://www.jyrongcheng.gov.cn/ReadNews.asp?NewsID=659 (in Chinese)