Following is the latest installment in a series of posts by journalist Rachel Beitarie*, who will be sharing with us dispatches from her journey across rural China. In this post, Rachel visits the town in Hubei that used to be the home of Deng Yujiao, the notorious waitress who killed a local official after he tried to assault her, and discovers that there are a million girls just like her. (Read previous installments of the travelogue here.)

Badong is a county in the western part of Hubei, dissected from west to east by two of the three gorges. It is rich in history, quite poor in land quality and resources, and undergoing a massive change due to the gigantic Three Gorges Dam that flooded part of the county.

It was here at the county seat, a town of about 50,000 people resting on steep slopes above the Yangze, that a young waitress was sexually attacked on the night of May 10th last year. She defended herself from the rapist, who happened to be a communist party official, stabbing him to death in the course of their struggle. The woman’s name was Deng Yujiao, a name that is now a symbol to many in China. She was, however, a real woman working at a real hotel in this very real town. That hotel no longer exists and Deng Yujiao left Badong, has reportedly changed her name and hopefully put this terrible trauma behind her. There are many other Dengs, and these are the stories of just two of them, who were never brave or desperate enough to stab anyone. There is nothing special about them, nothing unusual about their stories: just the kind of things that happen everyday in Badong – and everywhere else. Obviously, the names used here are not their real names.

Deng Yufei is 20 years old and has been working at a hotel in Badong for almost two years, cleaning rooms and making 700 yuan a month. She is originally from a village that was relocated because of the Three Gorges Dam. “Before, my parents could make a living from the crops they were growing, but now they depend on my help,” she explains. So at about seventeen she left her home and moved to Badong town, working first as a waitress and then as a maid in this hotel. She admires Deng Yujiao. “She was in a very difficult situation and she was very brave. I don’t know what I would do if it happened to me, I have been lucky so far.”

It’s an interesting use of the term. She goes on to describe her fabulous luck. “I haven’t been attacked, ever. Of course, guests try to touch me sometimes. The other day a businessman who stayed in that room there came behind me when I was cleaning the bathroom. He hugged me and put his hands under my shirt, but I got away. The first time it happened I told my supervisor and she gave me some advice how to avoid men like this: Try to get to cleaning the room when they’re not in, do everything real fast, don’t look at them, and leave quickly if they try to touch you. She also said that if I really get trapped, I should try and satisfy the man with a hand job. It’s safer this way. I only had to do that once. I am luckier than other girls.”

One of the other girls is Deng Yulan, who works in the same hotel. A few months ago, long after Deng Yujiao was released and left Badong, Deng Yulan was called to bring some food and drinks to a room one night. The guests were two men from another province, she doesn’t know from where exactly. When she put the tray down one of them ordered her to come nearer, saying he wanted “a special.” She turned to leave the room but he stopped her. “I don’t know what happened next. I only remember hands touching me. They were drunk and they couldn’t stop laughing. They shouted at me, “He cha, he cha” (drink tea), they slapped my face with their things. Then I was on the other side of the door. My face was dirty but I still had clothes on, and they threw a wad of bills on the floor near me. There was 1000 Yuan there. I sent the money to my mom and told her I got a bonus because we had to work extra hours. She was very happy: the money was used to pay my brother’s school fees. I haven’t told anyone except my friend (the other hotel worker). My mom would have never understood this. The supervisor said before to come to her if something happens so she can give you a (morning after) pill or help otherwise, but I didn’t need the pill and the people left town the next day, so what can be done? I am not Deng Yujiao.” She now takes classes in English and typing in her spare time, hoping to land a higher paying job as a secretary. 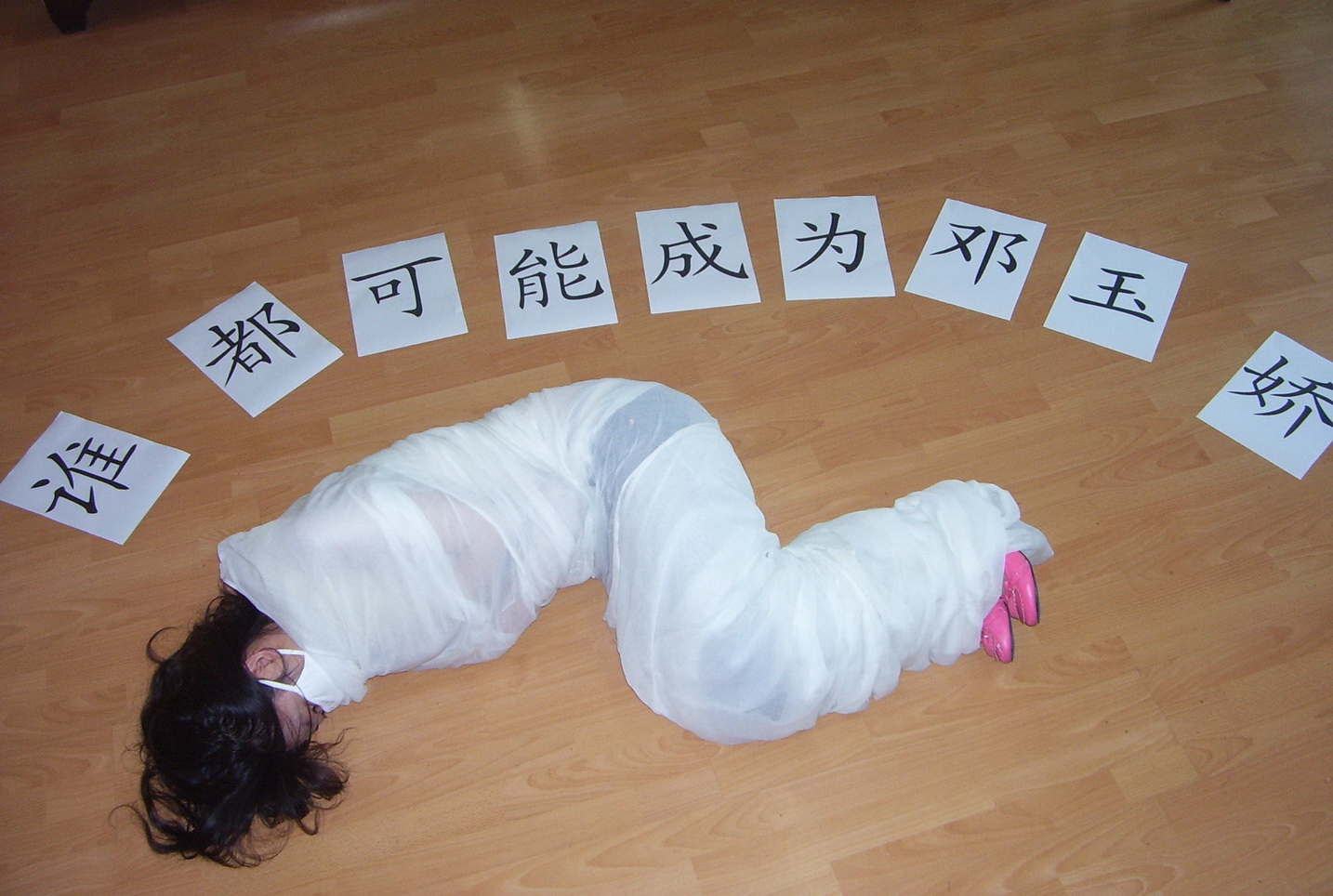 [In June 2009, students staged a protest in Beijing with signs reading, “Anyone could become Deng Yujiao.”]