Netizens Force Fang Binxing (方滨兴), Father of the GFW, Off of Sina Microblog 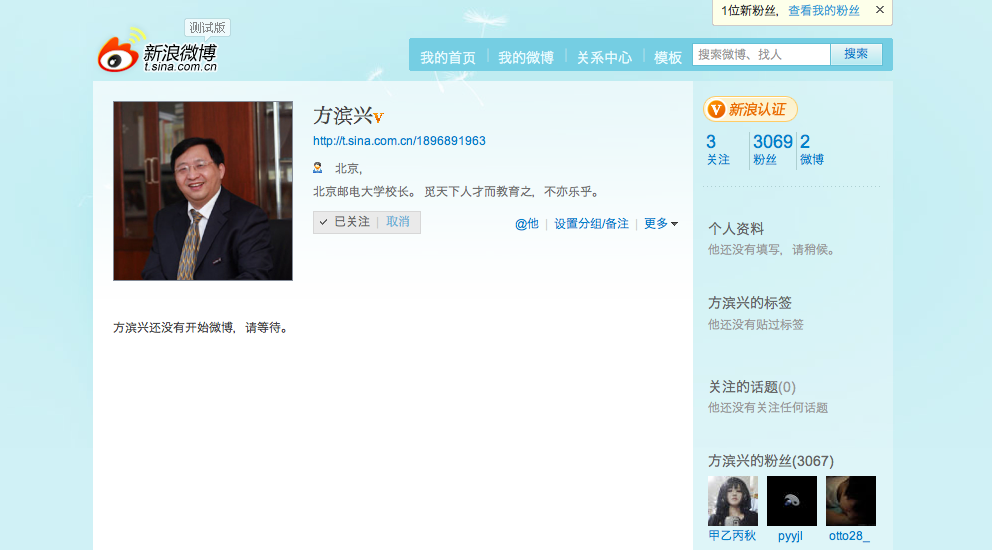 On Monday morning, Fang Binxing, (方滨兴) the President of Beijing University of Posts and Telecommunications who is known as the “father of the Great Firewall,” opened a Sina Microblog account. Within three hours after his second post was spotted by other micro-bloggers, over 3818 netizens followed him, and despite rapid deleting of comments to his posts by Sina editors, many comments still appeared, the vast majority of which made fun of or cursed him. At 12:55 pm Beijing time, about three hours after Dr. Fang’s posts was discovered by netizens, his original posts and all the comments disappeared.

Below is a sample of comments that appeared within a 30-second time frame (translated by CDT):

–I want to know how Fang Binxing’s mother feels about those comments???
-a Twitter user is here to laugh at Eunuch Fang’s GFW.
-fuck45364378885 gfw.
– He’s a skunk lower than animals.
–May I just pass by?
–@Fangbinxing – it’s you who made me learn how to use circumvention software, it is you made me understood how evil Google is.  I heard that you just opened an account on Sina Microblog service, so I came here especially to greet your whole family. [online slang: greetings to your whole family” means “f–k your whole family.”]
–This SOB dares to show up here. F–k your sister.
–Greetings to your whole family.
–F–k, who deleted all my comments?!
–User from Twitter came here to surround and watch.
–Hello.
–Before, GFW deprived people’s right to freely access the Internet, now people will deprive your right to use microblog.  You should not regret this, should you? If you cannot accept this, you can black list t.sina.com.cn
–f–k you 404 times. [when Chinese Internet users hit the GFW, often a blocked link shows a “404 error”]
– Sh–t, all above words have been filtered.
– testing.
-I expect all comments will be gone soon.
-only 125 comments left.
-no/Is chrysanthemum a dirty word? /You are so noble./I did not use dirty words.  I just used others’ words./This is the right way, cursing him but avoiding dirty words.
-Sina is so cruel, do not let their staff [the censors who are deleting comments under Fang Binxing’s microblog] off for lunch.
– Let’s throw bricks at Fang Binxing as quick as possible. 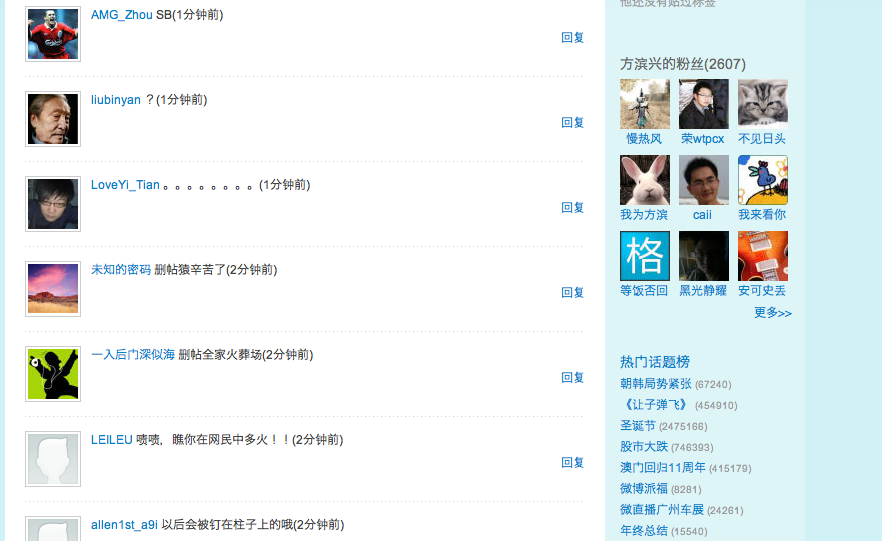 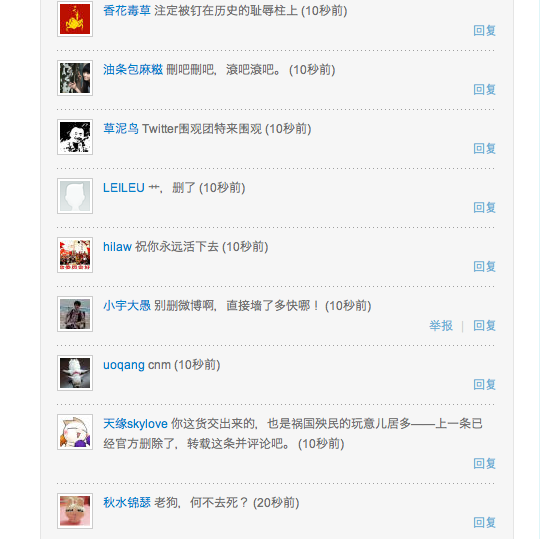 Some examples of additional comments posted are below:

– Brother Fang, when are you going to die?
-Please “wall” me.
– You SOB do not deserve to use Android. [Fang Binxing’s first two microblog posts were posted by using Android.]
– Can you have children? [traditional China saying: evil people will not have children or their children will not be able to reproduce.]
– Animal. Running dog of the government, lower than animals. Your son will have no penis and your daughter will not have a vagina.
-“Surrounding and watching” with deep emotions.
– I admire your courage for even daring to open a microblog account. But I still have to greet your whole family.
– This is the Father of the GFW. That’s right. when you key in Twitter, YouTube, Facebook and so on and got “This page cannot be displayed”.  That’s all his accomplishment.
– You SOB’s future “cannot be displayed!”
-So today all web editors are here deleting comments
-An enemy of the people will be tried eventually.
– I suggest you tell us who your coworkers are. Don’t take it all on yourself. You won’t be able to do this.
– GFW is a SOB. Whoever deletes this post, his whole family can go to hell!
– This is the mastermind of GFW, Fang Binxing.  Real father of the GFW.  He is the enemy of all netizens who are forced to scale the wall all day long because of GFW.
– Comments are being deleted in groups.
– Everyone from Twitter, say all you want here now!
– Wish President Fang a good time here!  We are waiting for you at Twitter.  Your future is bright!!!!
– Real truth here. Those who do not understand the actual situation should all come to see.
– I love this game!
– You’d better cancel this account…..
– Please don’t cancel this account. It would be no fun.
– I love you.
– To have just appeared and be so popular already, this can only be  him and Han Han. 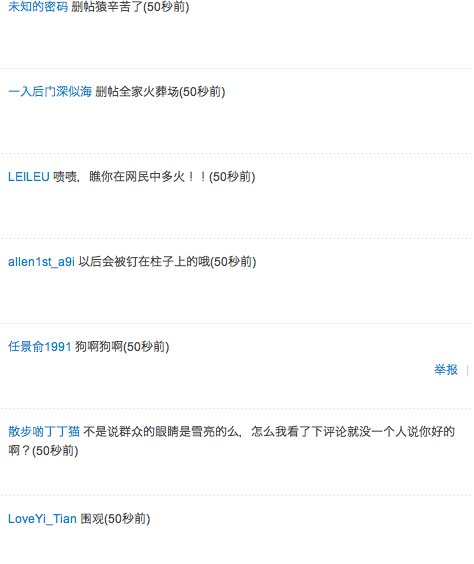 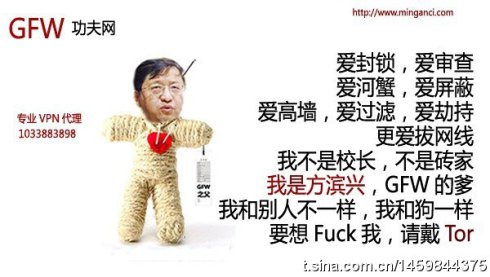 More comments in Chinese are here, here, here and here.