Zheng Yuanjie (郑渊洁; born 1955) is known as the Chinese King of Fairy Tales. He wrote the following on his blog during the ongoing NPC meetings in Beijing (Translated by CDT):

I am sixty- five years old, I have a Beijing hukou (household registration), I am a citizen of Beijing. I have a Hukou Record and National Registration Identity Card. However I have never had a Voter Registration Card.

Since China is holding the yearly National People’s Congress now, I have checked the “Election Law of the People’s Republic of China.” There are only three types of people who are not eligible to have the Voter Registration Card:
1. Younger than eighteen years old
2. A convicted criminal who is deprived of political rights
3. Psychologically unstable person

I am neither 1 nor 2; so the only reason that I have never had a Voter Registration Card must be the third one.

Following is the cover of yesterday’s “Beijing Youth Weekly”. Indeed it looks like I am a psychologically unstable person who is not eligible for Voter Registration Card. 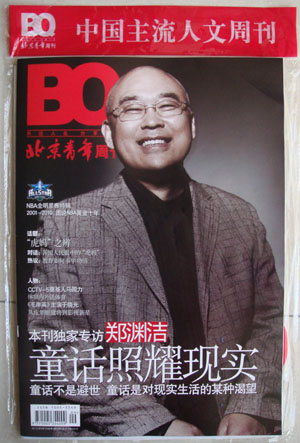