@jajia: From today on, remove the administrative and editorial oversight of the Beijing News from the Southern News Group, and transfer it to Guangming Daily Group. 今日起，取消南方报业集团对新京报的业务指导权，转交光明日报报业集团。

@aihuijiangtao: it was said that Beijing Times (under People’s Daily) and Beijing News (under Guangming Daily) both will be under the control of Beijing Municipal Party Committee Propaganda Department, belonging to Beijing News Group. @安徽蒋涛：据说，人民日报旗下之京华时报，和光明日报旗下之新京报，都将划归北京市委宣传部管辖，隶属京报集团。

While none of the above information has been confirmed by any official source, “Beijing News” “新京报” and “Beijing Times” “京华” have both become forbidden search words on Sina Weibo since yesterday. 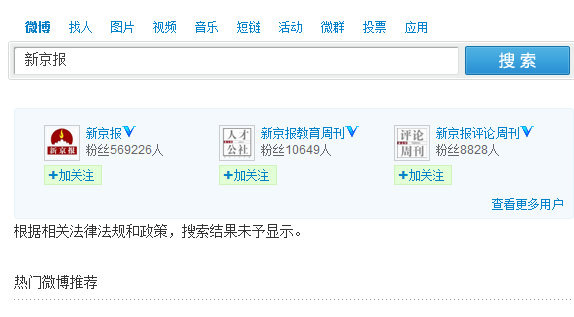 Update: China Media Project points to a weibo post by Caijing editor Luo Changping in which he confirms that the two newspapers will be moved under the direct administration of the Beijing Propaganda Department.