Wednesday, February 22 marks Losar, the traditional Tibetan New Year. The 15-day holiday is usually celebrated with meals, family gatherings, prayer services and other festivities. This year, however, Tibetan regions are greeting the holiday in a somber mood, following a call by exiled Prime Minister Lobsang Sangay to refrain from celebrating the holiday after months of turmoil and tightened security in the region. From CNN:

“But do observe traditional and spiritual rituals by going to the monastery, making offerings and lighting butter lamps for all those who have sacrificed and suffered under the repressive policies of Chinese government,” Sangay said.

Sangay asked for a somber New Year because of the “grim news” that continues to stream out of Tibet, he said.

The grim news includes reports that more than 20 Tibetans have set themselves on fire in protest, including an 18-year-old man who died after lighting himself in Aba county on Sunday. Lobsang Sangay spoke about the self-immolations to Australian Broadcasting Corporation:

EMMA ALBERICI: What is it exactly, what are you hearing about the individual stories of these people, the personal battles that have led them to this point?

LOBSANG SANGAY: Yes, in Tibet, Tibetans cannot protest, they cannot peacefully gather. If you do, you might get shot at; and you can’t have hunger strike, you can’t have rallies, and Tibetans see this the only or most drastic way of protesting against the repressive policies – because, let’s say, in monasteries, photograph of his Holiness the Dalai Lama is banned there overall, but you’re made to denounce the picture of the Lama who they revere. So much restriction is imposed that many choose to leave or expelled. Hence, they’re saying, given the circumstances – political, economic, social – they’re saying it’s so repressive they will give up their lives, and made a commentary that freedom be restored in Tibet.

EMMA ALBERICI: Has the Chinese government been moved by these brutal public suicides?

LOBSANG SANGAY: Unfortunately there is blatant discrimination as to how the Chinese government treat Chinese people and their protest, and Tibetan peoples’ protest. For example, the local party official in Lhasa has declared quote-unquote ‘war’ on protestors and Tibetans. Which government in the world would declare war against their own people? They have sent hundreds and thousands of troops to Tibetan people. As it is, Tibet is under undeclared martial law. There’s a Chinese writer who says that in Lhasa, the capital city of Tibet, there are more Chinese than Tibetans, there are more civilians’ cameras than windows, and there are more – if I may add – more guns that [inaudible] for Tibetan people. Under such circumstances the Chinese government and its hardline policies is discriminating and treating Tibetans quite badly.

NPR’s Louisa Lim reports from a monastery on the Tibetan plateau about the security crackdown that has been imposed following the self-immolations:

“Too many of our people died this year,” one monk told me, referring to nearly two-dozen Tibetans who have set themselves on fire as a protest against Chinese repression. Identifying details have been removed to protect those who talked to NPR.

Police cars patrol the streets here, and on the morning of the new year, security forces took pre-emptive action.

“Paramilitary forces from elsewhere were sent here,” says the monk. “There were tanks, too.”

“They closed off all the exits to our monastery and didn’t let us leave,” says a second monk. The paramilitary police withdrew afterward, but monks say plainclothes police remain inside the monastery. The monks listen secretly to Voice of America’s Tibetan service news every night, despite feeling almost physical pain at the bleak news.

Independent Online interviewed Tibet expert Robbie Barnett about the current situation and how the security clampdown marks a shift in strategy in Beijing’s handling of Tibet:

Robbie Barnett, a Tibet expert at Columbia University, said authorities in the TAR in particular had markedly tightened regulations.

Chinese authorities have stopped foreign journalists from going to the affected areas, making independent attempts to verify the situation there nearly impossible.

“I don’t think this type of mass internment for political reasons – as opposed to criminal reasons – has happened for decades. These are laypeople who have not been accused of anything forbidden in Chinese law,” said Barnett.

Barnett added that officials were also being permanently stationed in some monasteries, where a notional self-rule system had previously been in place that saw monks run supervision committees and report to higher authorities.

“This switch from indirect to direct rule means they have abandoned the attempt to maintain an appearance of non-intervention,” he said.

Meanwhile, the Chinese official media has downplayed the unrest in reports that Tibetans are happily preparing for a festive holiday season, while Global Times quotes a Sichuan official as saying that no self-immolations have happened this year.

The cartoon below, by “Crazy Crab” for Hexie Farm, is the first entry in a new series he is creating in collaboration with CDT: 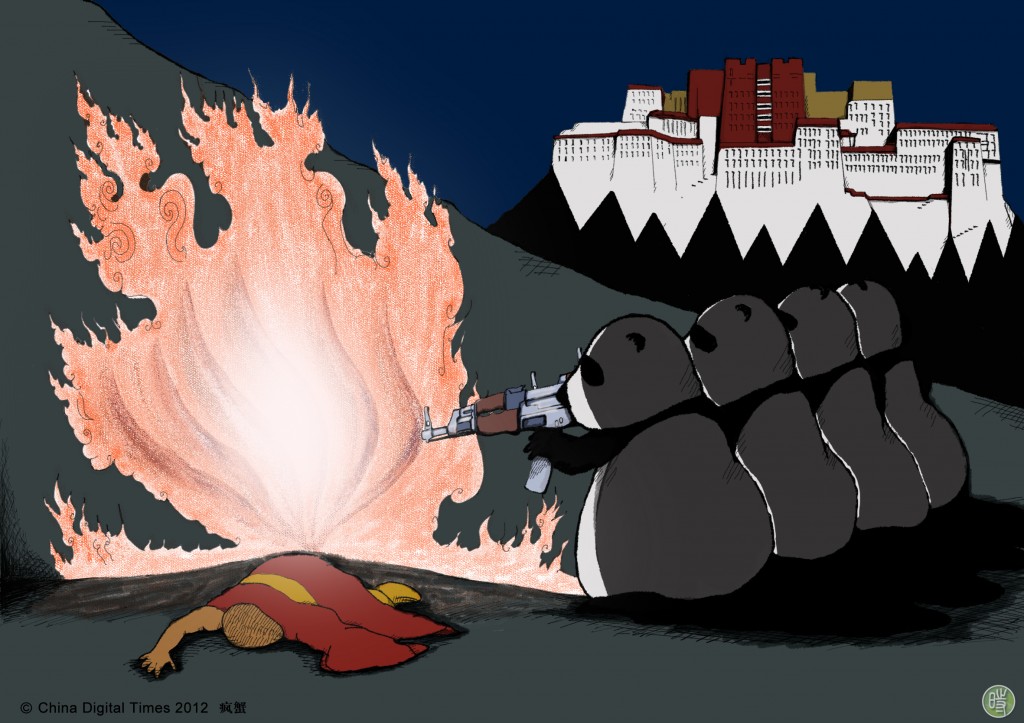