In a blogpost, Google announced that it will improve its search service in mainland China by notifying its users about sensitive search characters and phrases:

Over the past couple years, we’ve had a lot of feedback that Google search from mainland China can be inconsistent and unreliable. It depends on the search query and browser, but users are regularly getting error messages like ‘this webpage is not available’ or ‘the connection was reset’. And when that happens, people typically cannot use Google again for a minute or more

So starting today we’ll notify users in mainland China when they enter a keyword that may cause connection issues. By prompting people to revise their queries, we hope to reduce these disruptions and improve our user experience from mainland China. Of course, if users want to press ahead with their original queries they can carry on.

This video demonstrates what previously occurred when users searched banned terms on Google from China:
[youtube]http://youtu.be/u2GHyVPoVms[/youtube]

This screenshot shows what happens when users search a banned term on Google now. The term searched here is China Digital Times. The error message says: “Please note that searches from mainland China for ‘China Digital Times’ may lead to the user’s connection with Google being temporarily blocked. Google has no control over this interruption.” 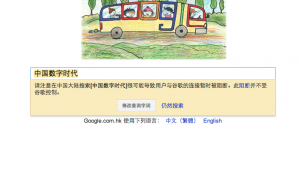 In Foreign Policy, Rebecca MacKinnon writes about the implications of Google’s move:

For the first time, Google is making it crystal clear to Chinese Internet users that their frequent connection problems while using its search engine are caused by the Chinese government, not by its own systems. According to Alan Eustace, Google’s senior vice president for knowledge, the purpose of this feature is to “improve the search experience in mainland China.” Users are given the option to “refine their searches without the problem keywords” in order to “avoid connection problems.” What Google executives won’t discuss — at least publicly — is the obvious fact that they are exposing the Chinese government’s censorship tactics in an unprecedented way.