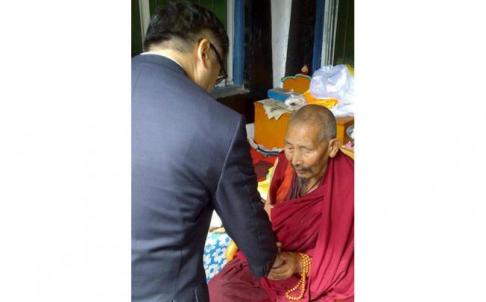 America’s ambassador to China has publicly acknowledged a late September visit to China’s western frontier, a region which has seen numerous self-immolations by Tibetans in protest of Chinese rule, according to The New York Times:

The ambassador, Gary F. Locke, visited two Tibetan monasteries on Sept. 26 as part of a trip to western China. The monasteries, which have not been involved in the 55 self-immolations across the Tibetan plateau since 2009, are in Aba Prefecture of Sichuan Province, the area where almost two-thirds of the Tibetans who have set themselves on fire lived.

It was Mr. Locke’s first trip as ambassador to a part of China where most of the people are ethnic Tibetans.

“I went to Aba Prefecture to see it for myself,” Mr. Locke said in a brief statement in response to questions from The New York Times. “I was struck by the unique Tibetan culture and met many ethnic Tibetans to learn more about how they live and work, such as an 88-year-old monk at one of the monasteries I visited. Ethnic diversity adds richness to a society.”

He continued, “I hope others will make the same visit.”

A U.S. State Department spokeswoman also confirmed Locke’s trip on Tuesday, according to the report. The New York Times published the above photo, which originally appeared on Twitter and which shows Locke shaking hands with a Tibetan monk. The South China Morning Post published the photo as well, and reported that Locke may have made the trip with Beijing’s approval:

Tibetan settlements in China are often off-limits to foreigners. The then executive vice-minister of the Communist Party Central Committee’s United Front Work Department, Zhu Weiqun , said last year that China would “never allow foreign forces to interfere in China’s internal affairs by any means”, when asked whether China would let the European Union send an independent diplomatic team to Tibet.

“I never believe it can settle any problem or bring good to its people for foreign forces to interfere in the internal affairs of another country,” he said. “On the contrary, it will intensify the contradiction and even lead to wars.”

Analysts said they believed Locke’s trip to Aba was made with Beijing’s tacit approval, or at least the approval of the foreign ministry, and signified that Beijing wanted to adopt a more flexible approach in dealing with Tibetans.

Locke has enjoyed a positive image during his tenure in Beijing, receiving praise in the media and among Chinese netizens for his frugality on more than one occasion. No comment has emerged so far from China’s Foreign Ministry, but Sina.com published its take on the news:

Since taking office as the first Chinese-American envoy to China, Gary Locke has expressed too much of his “great interest” about the so-called human rights situation in China. Analysts say Locke, putting on an act of being low-profile and close to the grassroots, will present a stark contrast with some Chinese officials. Locke has thus devised the image campaign to touch ordinary people’s soft sopts and also show America as a “democracy” model to the Chinese people.

What he has done thus far since he set foot on the Chinese soil is well beyond a professional diplomat’s scope of mission. Rather, as a politician and show person, he seems so accustomed to reaching out to something that could and would not fall within his territory. Much to his dismay, many achievements he has been seeking after are actually beyond attainment.