Hu Jintao: Corruption Could Be “Fatal” to Party

As the long-awaited 18th Party Congress kicked off in Beijing, President Hu Jintao, who is slated to step down from his position early next year, gave a work report that lasted close to two hours. Hu spoke out strongly against corruption, without mentioning Bo Xilai or other recent prominent cases by name. He also advocated systematic political reforms, but didn’t offer specifics and clarified at the end, “However, we will never copy a Western political system.” The New York Times reports:

Mr. Hu told the ranks of party-picked delegates assembled in the Great Hall of the People that China faced a period of major change and “complicated domestic and international circumstances.” Seated near him was his presumed successor, Xi Jinping, who is all but certain to take over as party chief after the congress ends next week and to take the reins as president in March.

Mr. Xi has privately signaled that he is aware of increasingly urgent calls from economists, intellectuals and some party insiders for a new round of market liberalization and even measured political relaxation to cure what they see as a deepening economic and social malaise. Mr. Hu acknowledged the problems facing the party, including corruption, but avoided specific mention of the scandals that have blighted his final year in power.

“Currently, the conditions of the world, the country and the party are continuing to undergo profound changes,” he said, reading from excerpts from his report to the party congress, which convenes every five years.

“Combating corruption and promoting political integrity, which is a major political issue of great concern to the people, is a clear-cut and long-term political commitment of the party,” Hu warned. He was opening a week-long congress at Beijing’s Great Hall of the People that will usher in a once-in-a-decade leadership change in the world’s second-largest economy.

“If we fail to handle this issue well, it could prove fatal to the party, and even cause the collapse of the party and the fall of the state. We must thus make unremitting efforts to combat corruption,” Hu said in a nearly two-hour speech.

Mark MacKinnon of the Globe and Mail reports that while Hu addressed a number of crucial and deep-rooted problems afflicting China, he made it clear that the Party would need to find ways to resolve them while maintaining power:

“To complete and improve co-operative democracy is the Communist Party’s work,” Mr. Hu said. He called for changes to the National People’s Congress, the country’s thus-far rubber-stamp parliament, so that it would include more “farmers and workers” – there was no suggestion they would be elected – and fewer Communist Party members.

He also addressed the country’s deeply flawed judicial system, where judges get political instructions on how to rule on sensitive cases. “We must completely push forward the rule of law in the country and insist everyone is equal before the law.”

But Mr. Hu made clear the changes will not affect the overall nature of China’s one-party state, a system the Communist Party calls “socialism with Chinese characteristics.”

MacKinnon was one of many foreign correspondents live-tweeting the proceedings from inside the Great Hall of the People: 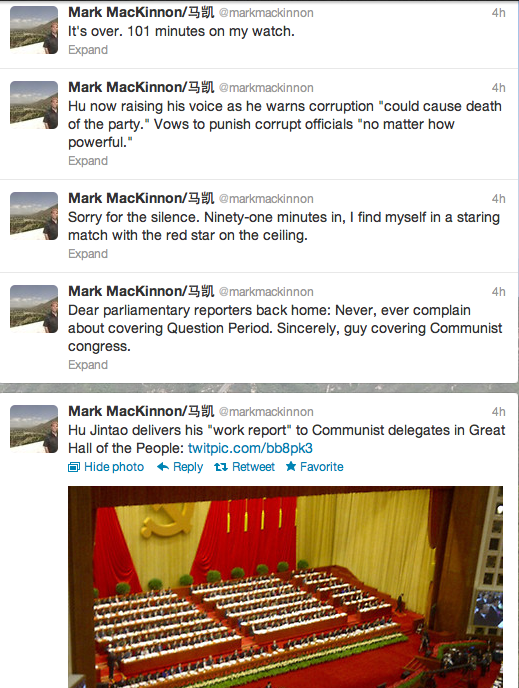