Saying of the Week: China’s Internet Is Open 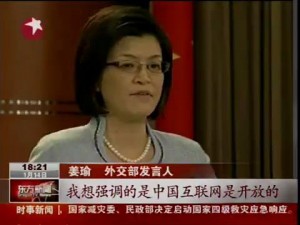 Jiang Yu: “What I want to emphasize is that China’s Internet is open.”

This official position was perhaps most famously repeated in January 14, 2010 by Jiang Yu, spokesperson for the Foreign Ministry. Below are her responses to two questions asked by reporters at a regularly scheduled press conference:

Q: Google announced that it might withdraw from the Chinese market and no longer cooperate with the Chinese Government on internet censorship. What’s China’s response to that?

A: I want to stress that China’s Internet is open. The Chinese government encourages the development of the Internet and endeavors to create a sound environment for the healthy development of Internet. As in other countries, China manages the Internet in accordance with law. The measures we take are consistent with international practice. I also want to stress that China welcomes international Internet corporations to do business in China in accordance with law.

A: I do not understand the situation to which you are referring. What I can tell you is that the Chinese government manages the Internet in accordance with the law. It has clearly written rules about which information should be prohibited from being spread on the Internet. I suggest that you ask CNNIC for information about this issue.

Jiang Yu’s comments were not the earliest mention of China’s “open Internet.” In 2009, Zhou Xisheng more dramatically stated that “China has the most open Internet in the world.” Nor were they the last: they were Foreign Ministry spokesman Ma Zhouxu’s retort to U.S. Secretary of State Hillary Clinton’s Remarks on Internet Freedom in late January 2010.