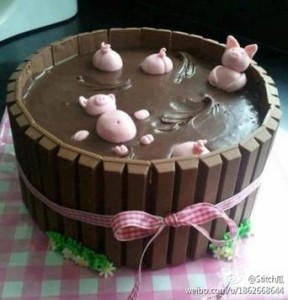 Chocolate allegedly inspired by the “pigfestation.” (via Weibo; h/t FT)

Central Propaganda Department: The Shanghai Huangpu River dead pig incident is already being dealt with effectively. Related follow-up coverage should follow Xinhua wire copy and information issued by authoritative local departments. The media are not to send journalists to Jiaxing or similar locations to investigate, nor to sensationalize or comment on the issue. (March 19, 2013)

As of yesterday at 10:29 p.m., nearly 15,000 pig carcasses have been pulled out of the Huangpu River, reports AFP. The pigs were dumped from Jiaxing, a town upstream from Shanghai in Zhejiang Province. The ongoing scandal continues to inspire dark humor online. Yaxue Cao at Seeing Red in China reflects on the relative calm of Shanghaiers as the corpses are pulled from the source of over 20% of the city’s drinking water.