Qingming, or Tomb-Sweeping Day, is being observed as a national holiday in China April 4-6 this year. The festival is a time to tend graves and welcome the spring. Relatives of the deceased will sweep tombstones and perhaps burn paper money and goods to send to the afterlife. FreeWeibo captured two weibo, now deleted, with special Qingming messages. 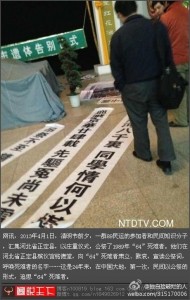 Internet Dispatch: On April 1, 2013, before the Qingming Festival, a group of 1989 democracy movement participents and folk intellectuals gathered in Zhengding County, Hebei Province, holding a solemn ceremony to publicly memorize the victims of June 4th, 1989. They stood in respect at the Deming Hall of Zhengding County Funeral Parlor in Hebei Province, paying silent tribute to the deceased; and gave a speech, reciting the names of the victims… This is the very first time in China, over the past 24 years, that the people have held a public ceremony to remember the victims of June 4th.

@老子叹曰: A taxi driver said, “Tomorrow, you must tell your children, in case we don’t live to see the day… after our country achieves democracy and constitutional government, at the first light of Qingming, don’t forget to burn a ballot to send me in heaven.”