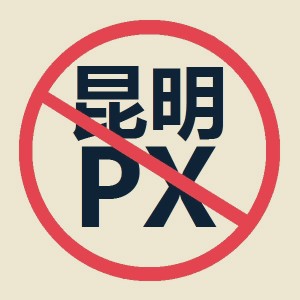 “No Kunming PX.” (via FreeWeibo)

Central Propaganda Department: With regards to the China National Petroleum Corp. oil refinery planned for Anning, Yunnan Province, report in strict accordance with Xinhua wire copy or authoritative information formally issued by the local government in the region. Do not speculate, do not comment, and do not send reports to investigate. (May 8, 2013)

On Saturday, residents of Kunming, the capital of southwestern Yunnan Province, protested construction of an oil refinery in nearby Anning. The plant would process the hazardous chemical p-Xylene (PX). While the protests were peaceful and unhindered by the police, the future of the project remains uncertain.