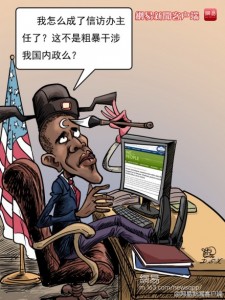 Chinese netizens mark Obama as a modern-day Bao Qingtian. “How did I become the director of the Bureau of Letters and Calls?” he asks. “Aren’t you interfering in our country’s internal affairs?” (Dashixiong @大尸凶的漫画)

Central Propaganda Department: If producing reports concerning the thallium poisoning of Tsinghua University student Zhu Ling, all media and website coverage must without exception accord with authoritative information from the relevant Beijing municipal departments. Do not challenge [the information from the authorities] and do not sensationalize the story. (May 7, 2013)

After the poisoning death of a Fudan University student last month, Zhu Ling’s 19-year-old case roared back to life on the Chinese Internet. Many netizens suspect Zhu’s former roommate, Sun Wei, now lives in the U.S. and goes by Jasmine Sun. A petition on the White House platform We the People to “investigate and deport” Sun, posted on May 3, now has over 131,000 signatures, exceeding the threshold for an official response from the Obama administration. The petition is a hot topic on Weibo, where netizens are echoing journalist Luo Changping’s remark that the White House is now the “Bureau of Letters and Calls of the People’s Republic of China.”