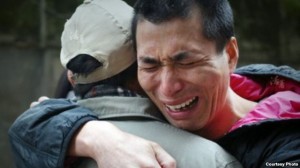 Wu Changlong embraces his father. He was found innocent and released from prison after serving 12 years. (Wu Huaying)

As of May 19, the following search terms are blocked on Sina Weibo (not including the “search for user” function).

Intertwined Injustices in Fujian: On June 24, 2001, a bomb exploded at the Fuqing City Discipline Inspection Commission in Fujian Province, killing one person. Wu Changlong and Chen Keyun were charged with the bombing, although they have always claimed innocence. The Fuzhou Intermediate People’s Court found them and several others guilty in 2004. The case was appealed and went to the provincial courts. In December 2005, the Fuzhou Supreme People’s Court again found Chen and Wu guilty and gave them both suspended death sentences. Wu’s sister, Wu Yinghua, continued to advocate for her brother.

This month Mr. Wu was found not guilty and released from prison. VOA reports that a censorship directive has been issued to the press barring them from reporting on his case [zh].

In 2009, Ms. Wu began assisting Lin Xiuying to seek justice after Lin’s daughter, Yan Xiaoling, died the year before after being gang raped. The police claimed that Yan had instead died from an ectopic pregnancy; Lin suspected the local police were involved. Ms. Wu helped Lin, who is illiterate, to blog and post video testimony about her daughter’s case. Ms. Wu and two others were detained in July 2009 and prosecuted. Ms. Wu was released from prison a year later.

Human Rights in China and Deutsche Welle [zh] have more information on both cases.