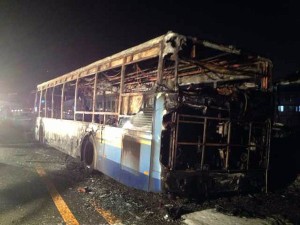 Explosions were heard in this bus soon after it caught fire. (Xinhua)

State Council Information Office: Regarding the “Xiamen, Fujian BRT bus explosion,” reprint only Xinhua reports and photos. Do not use reports from any other sources. Do not use the contents of blogs or weibo as news. Do not show bloody images. Strengthen management of interactive platforms such as forums, blogs, and weibo. Promptly delete harmful contents that are speculative, provocative, or accusatory in nature. Every malicious, sensationalizing weibo account must without exception be closed. (June 7, 2013)

A rapid transit bus in Xiamen caught fire during this evening’s rush hour, leaving at least 47 dead and 34 injured.