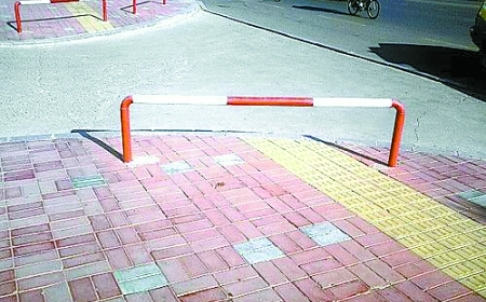 Beijing has more Braille pavement tiles than any other city in the world, with its tactile paving totalling 1600 kilometres in length. However, blind people told the Beijing Morning Post that the paving is of little benefit to their everyday life, and that walking on the tiles is “cruising for a bruising”.

[…] The report cited an incident where a blind person was violently assaulted by the owner of a luxury car illegally parked on one of these pathways after he accidentally knocked the car with his walking cane.

[…] And while a total of over 67,000 blind people currently live in Beijing, there are only seven registered guide dogs, Li said. Guide dogs along with all other pet dogs are not allowed to travel on public transportation, despite wide-ranging public appeal to make an exception for them. [Source]

Last month, The Economist described the difficulties faced by blind Chinese in pursuing higher or even basic education (via CDT). There are only 1,500 spaces at 22 dedicated schools for the blind across China, it reported, while only three universities, all in Shanghai, admit blind students.