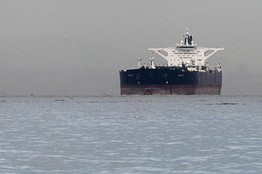 U.S. has intensified sanctions against Iran over the past decade. Its sanctions law is designed to punish any country that imports Iranian oil but it gives the State Department broad flexibility to exempt countries that shows a “significant”—though unspecified—reduction in their Iranian crude-oil purchases. State has repeatedly given exemptions to China on the grounds that Beijing is buying less crude oil from Iran. China won its third such six-month waiver in June.

The latest twist stems from a gap in the sanctions law: When discussing exemptions, it mentions only crude oil, not fuel oil, a byproduct of refining crude into more expensive products such as diesel and gasoline. While fuel oil is significantly less valuable than other refined fuels, some Chinese refineries can process it into more valuable fuels.

A look at Chinese customs data shows that after importing less than $1 million worth of fuel oil in all of 2012, China imported 5.4 million barrels of Iranian fuel oil valued at $495 million in the first seven months this year, more than in the past four years combined.[Source]

Meanwhile, Reuters reports that China imports twice as much crude oil from Iraq as it did a year ago because of the sanctions, to which it restated its opposition earlier this month:

China brought in 1.687 million tonnes, or 397,261 bpd of Iranian crude in July, up 3.2 percent from June, the data from the General Administration of Customs showed.

Iraq has been one of the main beneficiaries of the cuts in China’s Iranian volumes. China’s oil imports from Iraq more than doubled in July from a year ago and are up nearly 50 percent for the January-July period.[Source]