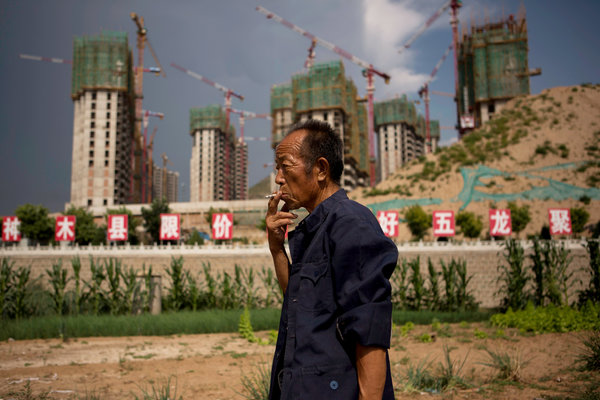 Shenmu is a dried up boom town in northwestern China that illustrates the effects of China’s recent slowdown. Luxury goods stores, exclusive private clubs and extravagant restaurants thrived as China’s economy boomed. But since loan defaults have become commonplace, credit is much harder to obtain and according to one Shenmu resident, “There’s no cash, everyone stays home without a job, there’s no way the economy can recover.” In The New York Times, Keith Bradsher examines the details and implications of the slowdown:

[…] Coal prices have dropped by half in the last three years as a result. Now, out of 90 mines near Shenmu, practically the only ones still operating are nine that are state-owned and do not need to show a profit.

The popping of the real estate bubble has been the most serious blow to the local economy. Real estate prices had soared in cities across China. In Shenmu, 1,200-square-foot apartments that sold for less than $20,000 a decade ago reached $330,000 by last winter.

[…] Public discontent is fueling street protests. Several thousand residents turned out in mid-July for a demonstration in the expensively paved square across the street from city hall, demanding that municipal officials revive the stalled economy. More recently, a smaller group of migrant workers protested, demanding that the local government pay their back wages after construction was halted on a row of high-rise apartment buildings. [Source].

Read a recent post on CDT about loan defaults here, and more about China’s economic slowdown via CDT.