Phrase of the Week: Slap on the Face 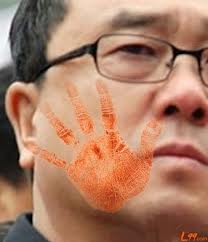 Wang Lijun’s slap from Bo Xilai was “heard ’round the world.”

The first became a pivotal moment in the downfall of former Chongqing mayor and Party chief Bo Xilai, and was revealed during the trial of fallen Chongqing police chief Wang Lijun, once Bo’s close ally and deputy mayor. When Wang revealed to Bo that his wife Gu Kailai was a suspect in the case of slain British businessman Neil Heywood, Bo reportedly slapped Wang on the face in front of his subordinates. This slap was apparently the tipping point that caused Wang, in fear for his personal safety, to flee the U.S. embassy in an unsuccessful bid for asylum. Wang’s flight drew Beijing’s attention to the murder investigation and ultimately led to the ouster of Bo and the conviction of his wife.

The other “slap on the face” occurred amid the 2012 protests over Japan’s claim to the Diaoyu Islands. During the protests, a pro-Mao faction emerged, shouting slogans such as, “We miss you, Chairman Mao.” An elderly man stepped forward and said, “It doesn’t make sense to place our hopes for our country’s dignity and nationalism on Mao Zedong.” Thereupon, well-known Mao-sympathizer and Beijing Aeronautical University professor Han Deqiang approached the elderly man and slapped him twice. The photograph of Han slapping the elderly man circulated widely on the Internet, and a national debate ensued. While many netizens were enraged and the party mouthpiece People’s Daily went so far as to publish an editorial urging Han’s arrest, other members of China’s New Left movement spoke in his defense. Han remained unrepentant, stating that the man was talking nonsense and deserved to be hit.