Does China Have a Good Case in Territorial Disputes? 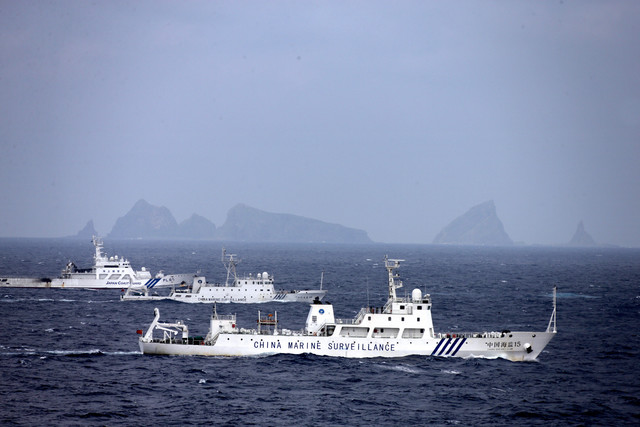 Last week, by flying bombers near Japanese territory ahead of the first anniversary of Japan’s controversial “purchase” of the disputed Diaoyu (Senkaku) Islands, China again portrayed itself as a bully in the neighborhood. Nevertheless, at the Diplomat, Trefor Moss looks back to history and sees that China actually may have a strong case in the ongoing territorial disputes:

Chinese navigators and fishermen had known about “the Fishing Islands” since the 15th century or earlier, and Qing-era Taiwan government documents indicate that the islands, though never settled by the Chinese, were loosely administered from Taiwan. China never claimed the nearby Ryukyus, but 17th-century Chinese sources suggest that China considered the Diaoyu islands to be separate from the Ryukyu chain, mentioning as they do a maritime boundary between them at a place called Black Water Trench (this trench is marked on modern maps). However, other sources assert that the islands were a part of the old Ryukyu Kingdom, andit seems the Okinawans knew about them, and fished their waters, even earlier than the Chinese.

By the 19th century, with Japan emerging as a regional power, we start seeing a clash between new and old ideas about power and sovereignty. Japan began exploring the Senkaku Islands in 1884 within a few years of annexing the previously independent Ryukyus, and then claimed them as sovereign territory in January 1895 on the grounds that they were unoccupied features (terra nullius) – not on the grounds that they were part of the Ryukyus. This approach ran counter to the older view that the islands, though unsettled, fell within the Chinese “sphere.” Japan is effectively arguing here that the war it was fighting with China at the time was completely coincidental to its annexation of the islands. The Chinese government did not protest, but as a failing regime it may not have been in a position to do so. The Japanese only now created the name “Senkaku” for the islands.

[…] Tentative conclusions: History puts the Japanese claim under pressure. The crux is whether Japan is justified in claiming that it took over the islands as terra nullius in 1895, or whether China is right to argue that Japan annexed an existing Chinese possession as spoils of war. [Source]

In a separate article in the South China Morning Post, Moss takes a similar stance on the dispute between China and Philippines over the Huangyan Island/Scarborough Shoal:

In much the same way, China arguably has a decent case regarding Scarborough Shoal. Here’s one important element of the case: China publicised its claim in 1948, and it took the Philippines five decades to object and counter with a claim of its own. Prima facie, that strengthens China’s claim quite substantially. [Source]