Is a College Degree Worthless in Today’s China? 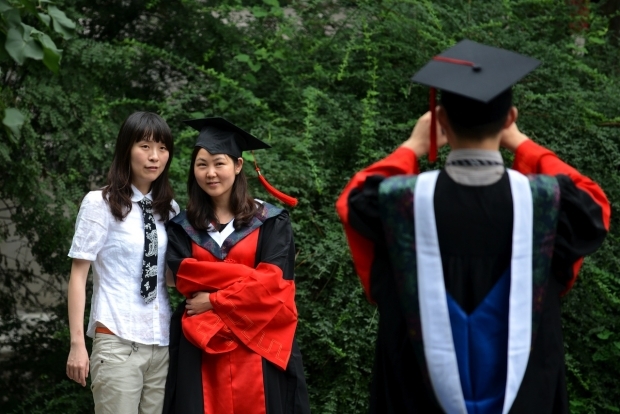 As many Chinese teenagers who passed the notoriously stressful gaokao college entrance exam started their college life this month, a father in Chengdu refused to finance his daughter’s college education, calling the college degree “useless.” From Weijing Zhu at The World of Chinese:

Ling Ling was born in a small village in a rural area, where her parents and relatives and were farmers. Her parents only finished elementary school, and started their own business. They moved the whole family including Ling Ling and her brother to Chengdu five years ago, and bought a storefront as well as an apartment. Tuition money is not the issue, Ling Ling’s father’s objection simply comes from his belief that studying is useless.

For many, the main benefit of having a college degree is to gain a better chance of getting a job and earning good money. However, it is becoming more and more difficult for college graduates to find employment. Even if you do find a job, the monthly salary is only 2,000 to 3,000 RMB.  Ling Ling’s father say: “It is almost the same as what a high school graduate earns, not only would [tuition] money be wasted but also four years of time. Not worth it!” [Source]

Ling Ling’s father was joined by netizens who also question the value of a college degree in today’s China. See Alia at Offbeat China:

Ling Ling’s story ignites heated debates among Chinese netizens about the value of a college education. Many agreed with her father, saying that in today’s China, a college is more like a place for entertainment to compensate for the previous 12 years of rigid learning than for knowledge, and that a college degree isn’t the only way leading to a successful career. For example, one netizen XX的读后感 commented: “Colleges and universities in China are very pragmatic. They serve as stepping stones to a good job, not as a place to offer true education.”

[…] Now seems to be the third wave of a general loss of faith in education. And the reason is simple. As China’s expanding colleges and universities generating more and more graduates, the job market is getting worse and worse, especially during an economic slowdown. Take 2013 for instance, a record-high 6.99 million fresh graduates are on the market. But in Beijing, the home of many of the country’s top universities, only 33.6% fresh graduates have signed up for employment as of May 10. [Source]

Carl Minzner at ChinaFile sees the college admission expansion in the late 1990s as one explanation for the depreciation of the degree:

In 1997, 400,000 students graduated from four-year university programs. Today, Chinese schools produce more than 3 million per year. But employment rates at graduation have plunged. And remote suburbs of Beijing and Shanghai teem with underemployed graduates, crammed four to a room in substandard housing and eking out an existence, often financially supported by their parents, as sidewalk vendors.

[…] In the late 1990s, the authorities launched a crash expansion of higher education as a short-term stimulus package to overcome the effects of the 1997 Asian Financial Crisis and as a longer-term economic development tool. With the spigot of state funding opened wide, universities expanded dramatically. Leafy campuses sprouted in the outlying districts of major cities. Academic hiring surged. And in just two years—between 1998 and 2000—the entering freshman class doubled from 1 to 2 million.

[…] In response, Chinese authorities are taking stopgap measures. Officials have increased enrollment in domestic master’s programs to absorb a flood of unemployed college graduates. But expanded levels of graduate education have merely disguised and delayed youth unemployment, resulting in media stories such as “Graduate with Master’s Degree in Law Seeks Position as Cafeteria Worker.” [Source]

While employment rates for the average graduate are plummeting, Chinese universities are producing an increasing number of CEOs, according to a new study by Times Higher Education. And students from South Korea are increasingly looking to Chinese schools as their best option for improving their future career options.

But for many Chinese students, the education system may not seem worth the investment of money and time that it requires. Chinese educators at both the university and secondary level are searching for solutions to the problems confronting the Chinese education system. As Kathleen McLaughlin reports in the Economist, a new proposal from the Ministry of Education calls for less homework, while also encouraging more hands-on projects and extracurricular activities, as a means to reduce the pressure college-seeking students feel to focus solely on test results. Others are looking to American classrooms as models for reform. Dan Levin at The New York Times:

[…R]uifan, 15, who goes by Derek in the United States, soon discovered that science was more than just facts and formulas meant to be regurgitated on tests.

At school in West Des Moines, Iowa, where he lived with a host family, his science teacher donned protective goggles and used a long-reach lighter to ignite a hydrogen balloon, just so students could get a firsthand look at the element’s explosive properties.

“When American high school students are discussing the latest models of airplanes, satellites and submarines, China’s smartest students are buried in homework and examination papers,” said Ni Minjing a physics teacher who is the director of the Shanghai Education Commission’s basic education department, according to Shanghai Daily, an English-language newspaper. “Students also have few chances to do scientific experiments and exercise independent thinking.” [Source]

But things do not always work out for ambitious Chinese students who choose to study abroad. Karin Fischer at The Chronicle of Higher Education tells stories of three Chinese students at Michigan State University:

Nearly 1,000 incoming freshmen at Michigan State last fall—roughly one in eight new students—were from China. That proportion was made yet more remarkable by this fact: Just six years earlier, fewer than 100 Chinese undergraduates, total, were enrolled here. In 2012, by contrast, more students starting their freshman year called China home than hailed from Illinois, Indiana, Ohio, Pennsylvania, and Wisconsin combined. It’s a significant shift at a university that has been called “a big Michigan high school.”

[…] Jianwei had only to look at her roommate to understand her good fortune. She was Chinese, too, but born in the United States, to parents who ran a restaurant in small-town Michigan. Every weekend she drove a couple of hours to work for her parents, to help cover her tuition.

[…] Jianwei’s parents were generous, although not as generous as some. Most of the fancy cars at Michigan State, the Mercedes and BMWs and Land Rovers, were driven by Chinese students. It was said that the local auto dealerships hired Mandarin speakers to cater to these new customers. Some on the campus saw this as a conspicuous display of wealth, and it may have contributed to tensions at the blue-collar institution. The previous summer there had been an ugly incident: Several cars were vandalized, “Go back to China” spray-painted on them in Chinese characters. [Source]