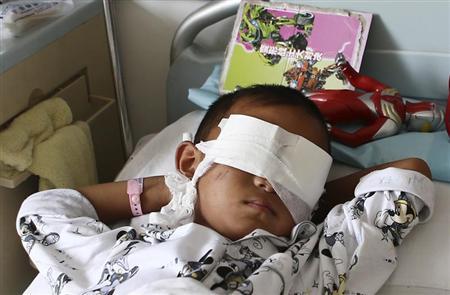 The now deceased aunt of Guo Bin, the 6-year-old boy found with his eyes gouged out in Shanxi Province last week, has been confirmed as a suspect in the case. From the Global Times:

Local police in Fenxi county, Shanxi Province, said late Tuesday that the suspect who gouged out the eyes of a 6-year-old boy was his aunt.

Zhang Huiying, 41, the aunt, killed herself by jumping into a well located in the courtyard of her own home on Friday.

She was announced to be the suspect after a series of lab tests which confirmed the woman’s DNA at the scene.

The police also found blood stains that are identified as belonging to the boy on Zhang’s clothes.

[…]The boy is still under medical treatment, and has not been told of his permanent loss of vision yet. The reason behind the attack remains unknown. [Source]

Reuters reports on the case’s resonance in Chinese social media:

Photographs and videos of the boy have circulated widely online since the attack, the most searched term on China’s Twitter-like Sina Weibo microblog service on Wednesday, with internet users trying to understand what many saw as an incomprehensible act of violence.

“Now it turns out the person who destroyed this child’s whole life may be a close relative,” wrote one user. “It’s hard not to feel helpless and bitterly disappointed… how painful.” [Source]

Meanwhile, a Hong Kong eye doctor has offered to treat the boy for free at his Shenzhen hospital. The South China Morning Post reports:

[Dennis Lam Shun-chiu,] a leading Hong Kong eye expert who visited a six-year-old mainland boy whose eyes were gouged out in an horrific attack says his hospital will treat him free of charge over the years ahead and hopes to eventually be able to help him “see” with a pair of electronic eyes.

Lam said the boy faced years of operations and placed his hospital in Shenzhen -the C-MER Dennis Lam Eye Hospital – at his service.

The hi-tech treatments will also involve putting sensors in his tongue and forehead to detect direction and movement.

[…]The team has explained all the options to Bin-Bin’s parents and are just waiting for their decision. If they approve, then the long series of operations will begin in a few weeks, after his injuries have had a chance to heal.

He will first be given false eyes to support his sockets and give him a more normal appearance.[…] [Source]