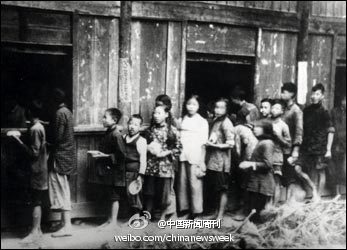 A Chinese professor was recently attacked by netizens on Sina Weibo for underestimating the death toll of the Great Chinese Famine from 1958-1961. Global Voices’ Oiwan Lam reports:

The hottest search term on Weibo on September 6, 2013 was “nutritional death” (营养性死亡). The term appears in a forum post written by Sun Jingxian, a professor from Jiangsu Normal University, claiming that the 30 million estimated deaths during the Great Chinese Famine (1958-1961) is a rumor. Instead, the professor estimated that about 2.5 million “nutritional deaths” had taken place during the “three year difficult period”.

As the word “deficiency” is missing in the Chinese term “nutritional death”, its meaning can be interpreted as death caused by either deficiencies or excesses in diet. Such ambivalence has outraged many netizens who believe that Sun’s intention is to cover-up the historical mistake committed by the Chinese Communist Party (CCP).

[…] Sun spent three years reviewing [zh] the census and claimed that the previous estimation was a result of census error due to urban-rural migration. His own estimation of “nutritional death” is about 2.5 million.

However, as the CCP has recently vowed to strengthen its ideological control and part of that campaign is to combat “rumors”, Sun’s accusation that the conclusions of previous research are “rumors” has very strong political implication. [Source]

Read more about the Great Leap Forward and the subsequent famine via CDT, including reviews of the book Tombstone by Yang Jisheng, which explores that period in Chinese history, and a recent censored post on Sina Weibo looking at the extent of the deaths from the famine.