Hessler From Cairo: “In China, It’s Never Like This” 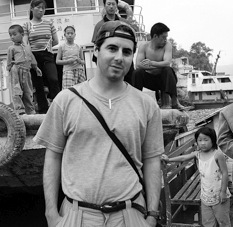 Seven years covering China for The New Yorker, along with the acclaimed books River Town, Oracle Bones, Country Driving, and most recently Strange Stones, have established Peter Hessler as a literary authority on the region. Since 2011, he’s been in Cairo covering the Middle East for The New Yorker. At the Washington Post, William Wan recently published an interview with Hessler from earlier in the summer (just prior to the coup that ousted former president Morsi), in which the author contrasts his experiences in the two countries:

WP: What other differences have you found since arriving in Egypt?

PH: The demographics. You go to protests in Egypt and the population is really young here. You still have big families, it’s like 53 to 55 percent of the population is aged 25 or something. That is clearly what is driving these protests. You have incredible groups, sometimes almost like gangs of young people and even kids and teens. Especially my first arrival here, I was thinking “No kid in China would skip school and go for rocks and police, with tear gas!”

You think about all the pressure on young people in China. Their lives are incredibly regimented. It makes me think that it’s a true revolution. You have a lot of grassroots activities, a lot of street-level protests. It looks much different in China. We get the big statistics on protests that happened in China, but it really matters who those protesters are and what they are asking for. Here [in Egypt] at every protest people would ask for the regime to step down and the president to resign. They demand complete overhaul. In China, it’s never like this, and it’s always specific things, localized demands. You never have a protests asking for the downfall of the communist party.

In China, you don’t have that core of young people, and I think that pushes things to another level because then they’re not experienced and can be extreme. I have seen kids doing things here that are pretty sobering, bodies carried back, and kid getting killed. And it is hard for me to imagine the same happening with the current generation in China. […] [Source]

Since Wan’s interview with Hessler, a mid-August crackdown on pro-Morsi supporters (an event that Hessler covered for The New Yorker) led many media commentators to draw parallels to the 1989 crackdown on pro-democracy demonstrators in Beijing.