Who Are the Winners in the Bo Xilai Case? 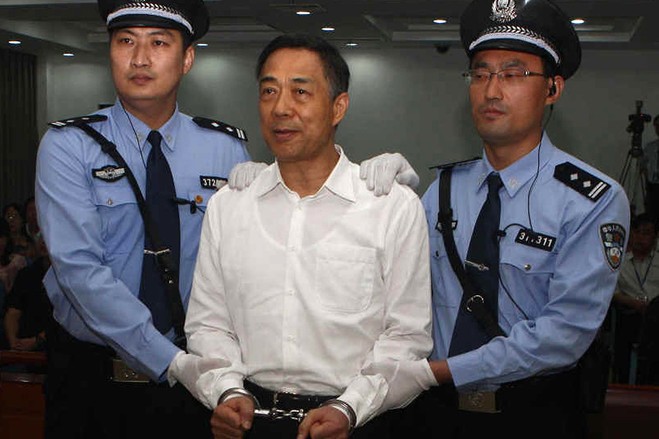 Following the announcement of Bo Xilai’s life sentence in court on Sunday, Simon Denyer reports for the Washington Post that his final defense may have helped his legacy even as it hurt his chances at a lighter sentence:

The charismatic former Politburo member had surprised many observers by mounting a stout defense against charges of corruption, embezzlement and abuse of power at last month’s five-day trial, possibly in the hope that he might one day be politically rehabilitated, as his father, a veteran Communist Party leader, had been.

But the gamble did not pay off, analysts said, and provoked a stronger sentence than many had anticipated. He was found guilty on all three counts, and in addition to his imprisonment, all his personal assets are to be confiscated.

“He launched a big show of defiance for the sake of his own legacy,” said Willy Lam, a political expert at the Chinese University of Hong Kong. “But obviously that infuriated [Chinese President] Xi Jinping. That’s why he was punished — for his defiance, not for his corruption.”[Source]

Bo’s “feisty” performance, pedigree, and Maoist outlook may have actually helped him avoid a harsher sentence like the death penalty, adds T.P. in The Economist:

In addition to the sentence of life imprisonment, the ruling called for seizure of all his assets and a lifelong revocation of his political rights. Mr Bo did dodge the death penalty, which had seemed a remote possibility, but many analysts expected a shorter sentence than the one he got.

The expectations for a relatively lenient sentence were not groundless. Mr Bo is sure to have in his possession information that could be damaging to China’s top leader, Xi Jinping, and the rest of his new government. It seems even now that he might be able to threaten to disclose it, through relatives or other associates who live abroad.

Mr Bo also retains a strong following for his left-leaning, Maoist-nostaglic political outlook. This, together, with his elite pedigree, might have been enough to protect him from such a severe sentence. Perhaps it was Mr Bo’s decision to mount a feisty defence rather than go down quietly that led to this outcome.[Source]

And Zheng Wang argues on the bright side in The Diplomat that Bo’s “Hollywood” performance in the courtroom left him, and everyone else involved, a “winner” in the end:

For Bo Xilai, his sentence of life imprisonment is not a surprise. His defense in court did not influence the result much, but his court performance made him a winner. He denied all of the charges against him, upholding his image among his supporters. His supporters can still believe that Bo is an unlucky official who had a bad wife who took advantage of Bo’s power for money and property. Once again, Bo proved through his performance in court that he is a persuasive speaker, and more importantly intelligent enough to execute an effective court strategy.

Before the trial, he cooperated with the leadership and accepted some of the charges when he was investigated by the Central Commission for Discipline Inspection of the CCP. The leadership then narrowed the scope of charges against Bo, focusing the trial only on bribery in Dalian and his misuse of power in handling his Chongqing police chief’s escape to the U.S. consulate. Bo and the leadership must have also reached an agreement that the names of current and former CCP leaders and any political issues would not be mentioned during the trial. However, after the trial began, Bo still denied all of the charges against him.

The prosecution was poorly prepared for the sudden change in script. The prosecution had already planned its case, so arranging new witnesses was not possible. Bo’s skilled and carefully planned defense also made the prosecution’s arguments look weak. Bo took advantage of knowing the evidence that would be used against him ahead of time, since most of it came from his wife. During the five day trial, Bo went to great lengths to portray his wife as mentally unstable and unfaithful in an attempt to undermine her credibility. At the same time, he attempted to generate public sympathy for his cause by painting himself as a dedicated public servant and an unwitting husband.[Source]

The Wall Street Journal’s Jeremy Page, on the other hand, portrays Xi Jinping as the number one winner at the trial’s end:

For many in the Party, the choreography aims to send a message that Mr. Xi now has unrivaled authority over the Party elite—civilian and military—as he prepares to unveil a package of potentially painful economic reforms at an important Party meeting, known as a “plenum,” in November.

“Xi Jinping wants to be a strong leader, but he doesn’t quite have the power he needs yet,” said Zhang Lifan, a Party historian and political analyst. “By dealing with Bo Xilai in this way, he’s sending a clear message ahead of the plenum that he will strike hard at any opponents.”

Mr. Zhang and others in the Party see a conscious attempt to emulate Deng Xiaoping, who launched China’s first market-oriented reforms at a plenum in 1978 after emerging victorious from a protracted power struggle after the death of Chairman Mao Zedong.[Source]

A report in Reuters also argues that Xi used the Bo case to assert his authority within the Party in order to ease the way for economic reforms:

“It’s (like) killing one to warn a hundred,” a source with ties to the leadership told Reuters.

The ideological fractures exposed last year by Bo’s fall from grace had hobbled Xi, forcing him to row back on an ambitious plan to rebalance the world’s second largest economy, sources close to China’s leadership have told Reuters.

The party’s fear had been that Bo’s supporters, who lauded him for the old-school leftist social welfare policies he championed as boss of the city of Chongqing, could remain a brake on reforms that favor private businesses and a greater reliance on market forces.

Xi needed the Bo affair settled because the next few weeks are critical for his government, which took office in March. [Source]

But The Useless Tree Blog cites Legalist history to suggest that Xi may have hardened “intra-regime opposition” by giving Bo a life sentence:

It seems obvious that Xi Jinping is using the Bo case (and we have to assume that Xi essentially made the decision for the life sentence) to send a strong signal that he is now in charge and that application of anti-corruption laws will be politically ruthless. The idea here, most likely, is to scare those within the regime – people like Bo who might have something of an independent power base – who might think of opposing Xi’s political pre-eminence or his policy preferences.  For those looking for silver linings in this whole sordid affair, it could be that Xi will now use his power to push through further structural economic reform, breaking the influence of vested interests in the nexus of state-owned enterprises and party organizations, and opening the way for more market-based opportunities in the national economy.

But there is a danger here for Xi as well.  By coming so strong against Bo, he could, perversely, harden intra-regime opposition.  And this is where our old friend Qin Shihuangdi comes to mind.[Source]

As for Bo’s reaction, the SCMP’s Keith Zhai notes that CCTV recorded him smiling even after he  cried out the words “unfair” and “unjust” upon receiving “the most severe punishment of a former Politburo member since the so-called Gang of Four’s trial”; throughout the trial, he has emphasized that his name will be cleared one day:

The defiant outburst – consistent with the combative defence Bo maintained during his five-day trial last month – was omitted from official accounts of the proceedings.

The court’s microblog said only that Bo “was escorted out of the courtroom” after the verdict was announced.

China Central Television broadcast footage of handcuffed Bo – wearing an open-necked white shirt, black slacks and black trainers – showing a hint of a smile as the verdict was read out.[Source]

Tania Branigan at the Guardian adds that scholars disagree about Bo’s potential post-prison prospects and some following the case even speculate that the Bo family could only move forward through princeling Bo Guagua:

A few think it is even possible that Bo himself could one day re-emerge as a significant force. “As long as he is alive there is a very small chance that he might reappear at some stage, not being rehabilitated by the establishment, but if the system should get into trouble down the line,” said Steve Tsang, an expert on Chinese politics at Nottingham University.Other Chinese scholars suggest a different kind of legacy, seeing echoes of his tactics in Xi Jinping’s approach with initiatives such as the “mass line” rectification campaign to purify the party.

“The chance that Bo returns to politics as a candidate for the leadership is zero,” said Cheng Li, of the Brookings Institution. “But he will remain as a factor that may shape the political trajectory of the country in the years to come.”[Source]

Meanwhile, Bloomberg columnist Adam Minter predicts that Bo will be planning his revenge:

Still, for all of the political expediency built into Bo’s sentence, it’s highly unlikely that he’ll spend his life behind bars; under Chinese law he’ll be eligible for parole in 13 years. By then, he’ll be in his mid-seventies, and many of his patrons and his enemies will have passed on. No doubt he’ll relish the opportunity to leave prison and cast his scornful gaze on his former comrades in Beijing, rather than wasting it on provincial court officials with whom he has no real quarrel. Bo, ever a patient and calculating politician, is probably already counting the days.[Source]

See the Wall Street Journal’s China Real Time Report for “a look at other high-profile penalties” in China and the following tweets for information on the conditions that Bo Xilai will likely face in jail:

Infographic by Sina News on the conditions under which #BoXilai is likely to serve his life sentence (1/2) http://t.co/k9Mqhd7l7W

Infographic: 20sqm cell w/toilet, no prison uniform, milk for breakfast, two dishes and one soup for lunch and dinner (2/2)

The Times of India adds that Bo should expect hotel-style treatment at the Qincheng Prison, a facility north of Beijing:

Hidden in wooded hills north of Beijing, guards stand outside the red gate of Qincheng prison, where the once-powerful Bo is widely expected to begin his life sentence after being convicted Sunday of bribery, embezzlement and abuse of power.

The jail has high grey walls, but there are no obvious signs of barbed wire or watchtowers.

“It’s like a five-star hotel,” said Bao Tong, a former secretary to the ruling Communist Party’s all-powerful Politburo Standing Committee who spent seven years in the prison for opposing the 1989 crackdown on protesters in Beijing’s Tiananmen Square.[Source]

See CDT’s Bo Xilai live blog for reporting on his trial in August.