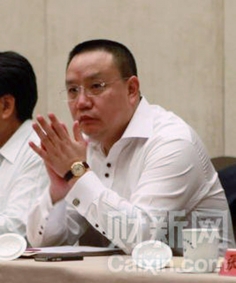 Wu Bing, a Sichuan-based tycoon linked to the oil industry and embattled former security chief Zhou Yongkang, has reportedly been detained in Beijing, according to the South China Morning Post:

Wu, who also goes by the name Li Ruochen and Wu Yongfu, is chairman of Hong Kong-registered Zhongxu Limited and the behind-the-scenes owner of various businesses, including Zhongxu Investment Corporation, a company based in Sichuan’s capital, Chengdu, registration documents show.

He is believed to have been seized in Beijing on August 1, two major mainland news organisations have reported, quoting anonymous sources.

In the past few months, overseas political gossip websites have been linking the 50-year-old with former security tsar Zhou Yongkang who is under Communist Party investigation for corruption.

Wu has not been seen in public since May 22, the same day he donated HK$10 million to the government of Yaan in Sichuan province. The city was hit by a 7-magnitude earthquake in April, the official Sichuan Daily reported. [Source]

While Reuters earlier reported that Zhou himself was not the direct target of the widening corruption crackdown on his allies, other media are quoting sources saying Zhou is under investigation. From the Economist:

In recent days rumours have been swirling in Beijing that Mr Zhou himself is under investigation for corruption. The Financial Times, a British newspaper, quoted an unnamed source as saying that Mr Zhou had been put under house arrest. If so, Mr Xi has overturned what has long appeared to be a party rule that serving and former members of the Politburo’s standing committee cannot be targeted for corruption. No one of such a rank has been detained since Zhao Ziyang was stripped of his job as party chief and put under house arrest in 1989 for sympathising with pro-democracy demonstrators in Tiananmen Square (he died, still under house arrest, in 2005). Nor has anyone of his rank been convicted of corruption since the party seized power in 1949. It remains unlikely, however, that Mr Zhou will actually be brought to trial.

It had been suspected for many months that Mr Zhou was under a cloud. He had close ties with Bo Xilai (above, left), an ordinary Politburo member who was stripped of his posts last year and tried in August for corruption and abuse of power. Mr Bo is expected to be given a heavy sentence within the next few days. Before he was purged, Mr Bo was considered likely to take over the security role when Mr Zhou retired. By targeting Mr Zhou, Mr Xi could hope to eradicate any remaining influence that Mr Bo might enjoy among the party elite. Mr Bo was a charismatic populist who could have challenged Mr Xi’s authority had he taken on Mr Zhou’s mantle. In March last year, days after Mr Bo’s arrest, rumours circulated widely through Chinese social media of an attempted coup by Mr Zhou in support of Mr Bo. Those rumours, unlike today’s, were quickly dismissed by most observers as fanciful. [Source]

Another Economist article posits that the targeting of Bo, Zhou and their allies could be the outcome of a political struggle launched against President Xi Jinping’s enemies:

[..T]his corruption drive is also open to another interpretation. To begin with, the tigers being rounded up are Mr Xi’s enemies. Mr Bo had hoped to use Chongqing as the springboard to the Politburo’s standing committee. The verdict on Mr Bo, expected any day, is a foregone conclusion. His sentence will be decided at the highest levels of the Communist Party, and it can only be harsh. Party politics, as seen by its players, is an all-or-nothing game, and the stakes are even higher when family prestige and fortunes are at stake.

Mr Xi is also open to the charge of being selective about leaving other tigers untouched. His own family’s fortune, piggy-banking off Mr Xi’s career, runs into hundreds of millions of dollars. Even as Mr Xi rails against corruption, he has overseen a crackdown on reformers calling, among other things, for the assets of senior cadres to be disclosed. And although the party makes much of how Mr Bo’s trial is the rule of law at work, many of the moves against Mr Bo, Mr Jiang and Mr Zhou appear to be taking place in a parallel and obscure system of detention for party members known as shuanggui. [Source]

While the oil industry has been especially hard hit by the ongoing investigations, the Wall Street Journal reports that the large state-owned behemoths will likely emerge unscathed while the smaller businesses surrounding them they suffer the brunt of the crackdown:

The investigation into high-ranking officials at China National Petroleum Corp. and its listed unit, PetroChina, is likely to hurt small private companies that have tight business relationships with the state-owned enterprise more than it hurts Petrochina, some analysts say. PetroChina’s shares in Shanghai have hardly budged since news of the investigation broke last week. The same was true in past corruption probes into the banking and railway industries.

The state-owned enterprises are powerful machines, and their favored position in China’s economy counts for more than whoever happens to be at the top.

“The bulk of the damage from the continued anticorruption measures may fall most heavily over the private space,” said Wendy Liu, head of China equity research at Nomura Holdings Inc. Large state-owned companies “targeted in past probes actually emerged stronger as procurement process and procedures do become more transparent and disciplined.” [Source]

A crackdown on corruption is likely to get widespread public support in China, but netizens have expressed some cynicism toward the current campaign, although most critical comments have been censored. Tea Leaf Nation translates weibo comments:

I hope that through the Bo Xilai case the battle against greed and corruption can be spurred on: uncovering more and larger greedy tigers and flies, purifying the whole economic state of the country, and calming the people’s worries over hate and greed. We can only resist encroaching diseases from the outside if we are strong.但愿通过薄熙来案件打响反腐治贪的攻坚战，揪出更多的更大的巨贪老虎和苍蝇，一净化国家经济秩序、抚平百姓恨贪忧心。只有身体强壮了才能抵御外来病毒的侵害。

Voices expressing a lack of faith in the campaign were fewer and farther between. One user, however, expressed some dissatisfaction with the movement:

A foreign friend asked: in a democratic nation, in the case of a corruption investigation of high government officials, it would be a very dirty political scandal. It would cause the entire country to be humiliated. However, in your country, why is ‘clearly stating the Party Central Committee’s resolve to oppose corruption’ shown off as good news to inspire the people?一个外国盆友问：在民主国家，政府高官如果因贪污腐败被查处，属非常龌龊的政治丑闻，它会使整个国家蒙羞。但在贵国，为什么这却是“充分表明了党中央反腐败的决心”而炫耀的、振奋人心的好消息？

Another microblogger responded, “This is the government’s ability: to turn funeral arrangements into a happy wedding.这是政府的能耐，把丧事操办成喜事。”

Other voices — those calling the anti-corruption campaign a show, or arguing that such publicized efforts were meant as a distraction from rather than a solution to system-wide problems — were censored. [a href=”http://www.tealeafnation.com/2013/09/flies-over-tigers-three-months-into-xis-anti-corruption-campaign/#sthash.7gBi1CYH.dpuf”>Source]

In the Financial Times, Jamil Anderlini compares Xi’s anti-corruption campaign to one waged by Hu Jintao early in his presidency and asks why Xi thinks his will have different results:

The answer has to be that his ultimate goal is not really to tackle endemic and worsening corruption within Communist party ranks, but rather to boost flagging popular support for continued party rule by appearing to get tough on the bad guys.

After all, if Mr Xi really wanted to root out corruption he would introduce independent checks and balances on party power, allow tightly controlled media to report freely on official malfeasance and also allow the public more say in how they are governed and by whom. [Source]